PLANT CITY3 Weeks Ago4 Months Ago4 Months AgoIn 1993, 3-year-old Lauren McNair, standing all of about 3 feet tall, showed a 1,000-pound dairy cow in the pee wee showmanship at the Florida Strawberry Festival."I remember the young lady who owned the cow... 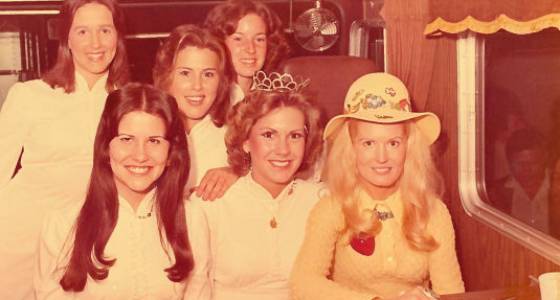 In 1993, 3-year-old Lauren McNair, standing all of about 3 feet tall, showed a 1,000-pound dairy cow in the pee wee showmanship at the Florida Strawberry Festival.

"I remember the young lady who owned the cow who I was helping. She actually won a big prize with the cow in the regular show and got this really big purple ribbon which she gave to me," said McNair, who now serves as the public relations and media representative for the festival.

To this day, McNair still has the ribbon.

That was the Plant City native's first memory of the festival, which she attended every single year since.

"I think the festival represents the heart of Plant City: the love of strawberries, agriculture and hospitality," McNair said.

In 2015, McNair started the process of documenting what the community event has meant to Plant City since its start in March 1930. Two years later, the result is a 208 page coffee table book, The Florida Strawberry Festival: A Brief History.

The book, co-authored by Gilbert Gott of the Plant City Photo Archives and History Center, debuts when the 82nd annual festival launches its 11-day run.

"I think it's a great representation of what the festival has meant and still does," said general manager Paul Davis.

The book will be on sale for $30 in the neighborhood village building.

"About 12 to 15 years ago, they really wanted to record the festival's history and so we made an attempt at it, but it kind of fell by the wayside," McNair said.

One attempt was made in 2002, but the board didn't approve and so it was never published.

"When Paul Davis came in as general manager nine years ago, he really got the book going," Gott said.

Many people didn't think it would be a two year project.

The biggest challenge proved to be choosing what to include.

At meetings, McNair and Gott began by organizing all of the festival's historical documents filed in the archives room on the grounds.

Another surprise was a photo he came across, taken right after the festival moved from the east side of town to the west.

"They had built a stage, a big platform and women were participating in the queen pageant in their swim suits in 40 degree weather," Gott said. "I'd see photos and they were shivering."

McNair marvels of how the festival once asked the Florida State University president to allow pageant participants to leave the Tallahassee campus to return home for the pageant.

"I found this letter, the festival president wrote to Doak Campbell, who was at the time president of Florida State University," McNair said. "He requested that the queen that year and the court members who were all students there be excused from their classes for the week of the festival."

The festival's big draw, headline entertainment, all started with the queen pageant.

"The Plant City Lions Club, which organizes the pageant, wanted to bring in a celebrity to emcee. They tried to get Roy Rogers and he was unavailable, but his wife, Dale Evans, was available," McNair said. "She was the first then the following year they had Pat Boone as emcee.

"In 1972, the festival took over and started booking headline entertainers because they saw how popular they were."

By documenting the community-driven event, McNair and Gott now rank in the festival's history as well, along with the former Mr. and Mrs. Tourist tradition of the '80s and a photo of Wayne Netwon standing in a pig barn next to a pageant queen in formal wear.

With more headline entertainers like Rascal Flatts, Willie Nelson and Patti LaBelle coming this year, the festival will look to record new memories — but the newest snapshots will continue to capture the festival's folksy charm, hometown flair and agricultural roots.