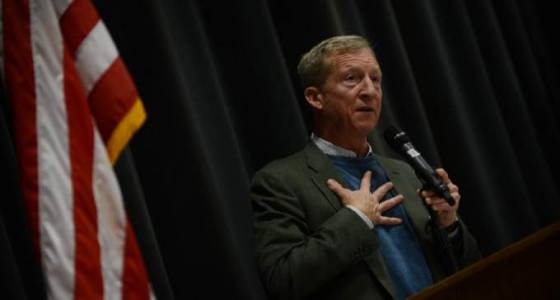 “We have ICE raids going on in our state,” he said, referring to recent Immigration and Customs Enforcement arrests of undocumented immigrants. “Trump is coming after California.”

Steyer, who lives in San Francisco’s upscale Pacific Heights area and has flirted with a run for public office in the state, said Trump and his enablers “have launched an all-out assault on the American way of life.”

“These people are liars and they are cheats,” he said.

The crowd at the Sonoma County Democratic Party’s 29th annual crab feed fundraiser applauded often and gave him a standing ovation at the end of a 15-minute speech, which included a song by his wife, Kat Taylor, briefly joining her husband on stage at the Santa Rosa Veterans Memorial Building..

The single largest campaign contributor during the 2016 election, Steyer spent more than $87 million nationwide. His net worth, according to Forbes.com, is $1.2 billion.

“Mr. Steyer fired us up,” said state Sen. Mike McGuire, D-Healdsburg. “Democrats are motivated to make a change at the top.”

Rep. Mike Thompson, D-St. Helena, sat next to Steyer during dinner in an auditorium packed with rank-and-file Democrats, along with local officeholders past and present.

NextGen will be engaged in the resistance to Trump, which Steyer said cannot wait until the next election. “We mobilize supporters on campus and through social media. We know this struggle is not going to be easy.”

Californians gave Hillary Clinton 4 million more votes than Trump, and Sonoma County, where Democratic registered voters outnumber Republicans by nearly 3 to 1, favored Clinton by 69 percent — seven points higher than the state as a whole — to 22 percent for Trump.

“We want to stand with every person in Sonoma County to protect the California dream,” Steyer said.

Steyer did not mention in his speech the question that follows him almost everywhere: Is he planning to run for governor in 2018?

In an interview, Steyer said, “this isn’t about me,” adding that whatever he does will “respond to the threat to California and America.”

Asked again, he said: “When we’ve figured it out you’ll be the first to know.”

Told that her husband had not answered the question, Taylor said: “And he shouldn’t.”