While its sales were down during the holidays, Richfield-based Best Buy managed to report better-than-expected profits in the most recent quarter.Profits rose 27 percent to $607 million in the November-to-January quarter, up from $479 million. Adjusted for... 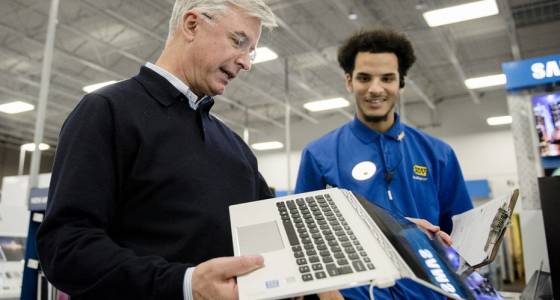 While its sales were down during the holidays, Richfield-based Best Buy managed to report better-than-expected profits in the most recent quarter.

Profits rose 27 percent to $607 million in the November-to-January quarter, up from $479 million. Adjusted for one-time issues, the company reported earnings per share of $1.95, which was higher than the $1.67 analysts were expecting.

The company’s stock was down 9 percent in premarket trading though as the company forecast lower sales for the coming quarter as well as lower earnings per share than analysts were expecting.

“Our strong bottom-line performance in the fourth quarter was driven by a disciplined promotional strategy, continued optimization of merchandise margins and strong expense management,” CEO Hubert Joly said in a statement.

He added that sales were hurt by “unprecedented product availability constraints across multiple vendors and categories,” and noted that only some of them were anticipated. Sales in gaming were also weaker than expected.

Best Buy also said in November that it expected a $200 million hit to sales in the quarter stemming from the recall of the Samsung Galaxy Note 7.

Comparable store sales in the U.S. were down 0.9 percent in the quarter and overall revenue was down slightly to $13.48 billion, lower than the $13.62 billion analysts expected.

Joly also said the company is phasing out of its Renew Blue turnaround phase, which it started in November 2012.

“We now feel it is time to call Renew Blue officially over and launch our strategy for the next phase of our journey: Best Buy 2020: Building the New Blue,” he said. “In this next phase, we go from turning the company around to shaping our future and creating a company customers and employees love that continues to generate a superior return for our shareholders.”

The company’s growth strategy will be focused on maximizing its multichannel business, expanding services and solutions, and increasing growth in Canada and Mexico.

For the coming year, Best Buy forecast flat revenue and operating income on a 52-week basis based on the assumption the company will continue to gain market share while the overall electronics industry will remain negative, as it has been the last two years. The company said it also expects product availability issues to continue in the first half of the year.

In the first quarter, it is forecasting a 1.5 to 2.5 percent drop in comparable sales in the U.S. as the retailer expects to see softness in the mobile phone category and in other categories.

Best Buy also announced today a 21 percent increase to its dividend and an accelerated share repurchase program to $3 billion over two years, up from $1 billion.