DALLAS -- Jamie Benn was hardly willing to concede that Dallas is out of playoff contention, even after the Stars made a trade earlier in the day that seemed to indicate they were looking to the future.Benn scored the tiebreaking goal in the third period,... 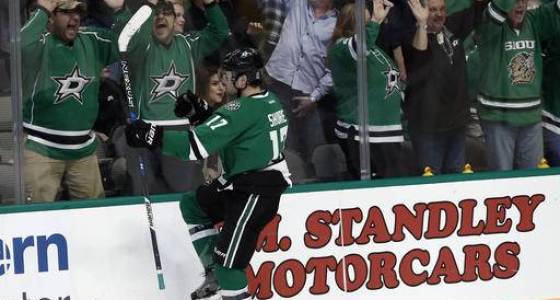 DALLAS -- Jamie Benn was hardly willing to concede that Dallas is out of playoff contention, even after the Stars made a trade earlier in the day that seemed to indicate they were looking to the future.

Benn scored the tiebreaking goal in the third period, and Dallas beat the Arizona Coyotes 5-2 on Friday night.

Jordie Benn sent the puck from the neutral zone to the boards behind the Arizona goal. His brother, Jamie, took the puck to the left of the net and scored on a wraparound before Coyotes goalie Louis Domingue could move across to the right.

The goal was one of four straight for Dallas in the last 22 minutes after Arizona took a 2-1 lead.

"I thought it was a heck of a play," Stars coach Lindy Ruff said. "It's a play that we've seen the Sedins (Vancouver's Henrik and Daniel) use before, where you dump it off the end wall and get a step.

"Benn makes a great play on that, and then we just couldn't generate anything after that," he said.

"It's a great player making a good play. It's almost something out of nothing. It should be an icing and it turns into a goal."

Dallas was 12th and Arizona 13th in the 14-team Western Conference before the game, and the Stars were 10 points out of the final wild card. Dallas had the best record in the West last season.

"We put ourselves in this situation," Jamie Benn said, "but we've still got a chance to get in this, and it started with tonight."

During the day, the Stars traded Patrick Eaves to the Anaheim Ducks for a conditional draft pick. Eaves is still tied with Jamie Benn and Tyler Seguin for the team lead with 21 goals.

"We've been linemates for most of this year," Jamie Benn said. "It was tough to hear that news."

The Coyotes twice took a one-goal lead. Radim Vrbata scored in the first period and Martin Hanzal in the second on an assist from Vrbata.

Dallas replied with a goal by Devin Shore in the first period and another by John Klingberg on the power play to tie the game at 2 after two periods.

Stars goalie Kari Lehtonen made 25 saves, while Domingue had 32.

Jamie Benn and Shore each had a goal and an assist for Dallas. Esa Lindell had two assists.

NOTES: Arizona's Luke Schenn prevented a goal with five minutes left in the second period. Brett Ritchie's shot at first was ruled a goal, but a review showed that Schenn hooked the puck with his stick and knocked it away before it crossed the goal line. ... Vrbata has a point in each of his last eight games (three goals, five assists). ... Hanzal's goal was his 16th of the season, tying his career high. ... Coyotes goalie Mike Smith was sick, so Arizona called up 20-year-old Adin Hill from Tucson of the AHL as an emergency replacement. ... Klingberg played in his 200th NHL game. ... Spezza's assist was his 100th for Dallas. ... Lehtonen is 14-4-4 against the Coyotes in his career. ... Coyotes C Alexander Burmistrov left in the second period because of an upper-body injury. Tippett indicated that Burmistrov would be day to day. ... Dallas' win improved the record of teams coming off their five-day bye week to 5-12-4. "I still think it's an unfair advantage for a team that comes out of it to play a team that's up and running," Ruff said.

Stars: Play the third of five straight home games vs. Boston on Sunday.