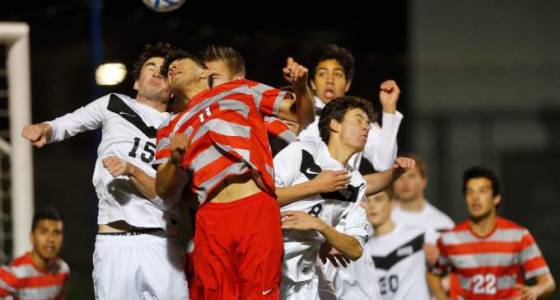 It’s not a foul or part of the game. It’s after the whistle, when the scoreboard says Home: 1, Visitor: 0.

Sophomore Alan “Momo” Soto could not be consoled Saturday night after the North Bay League champion Montgomery Vikings lost the Division 2 North Coast Section boys soccer final in the second golden goal overtime period, falling 1-0 to the tournament’s No. 2 seed, Acalanes High School. Team captain Carson Wyatt held on to his teammate tight, but Soto’s churning energy, which created so many chances ,was still roiling after the final whistle.

“We were more determined,” he said, his face still tear-streaked. “It was just who had more left.”

The Dons, playing on their home field, knocked home the game winner after 98 minutes of scoreless soccer, sending the No. 5 seed Vikings home with second-place medals around their necks.

Vikings coach Jon Schwan told his boys they gave the Dons, a team that clearly used throw-ins as set pieces from the muscle of Schirmer, one too many chances for the junior to launch the ball into the box.

Elation on one side, players mobbed by fans who flooded the field. Tears and offers of comfort on the other. Only a few feet separated the Dons from the Vikings at the whistle, but they were worlds apart.

It was Soto who got the Vikings closest to victory, hitting the right post with eight minutes to play in the second half after receiving a pass from junior Bryan Rosales and fending off two defenders to get a shot off.

“I got good acceleration on a good ball from Bryan,” he said. “I lost my balance and it didn’t end up in the goal.”

It was not for lack of trying. Soto provided a spark for the Vikings all night long, but the Dons came up with an answer for Montgomery’s speedy attack.

Rosales was everywhere for the Vikings, controlling the tempo in the midfield and using deft passing to create chances in the Dons’ defensive third. But the Vikings, who averaged 2. 5 goals per game in their 19-5-3 season, could not get one.

“Bryan was outstanding,” Schwan said. “Especially as the game wore on. We were able to settle the game down.”

The Dons could not match the Vikings’ attacking speed, but did a solid job of slowing down the Vikings attack, forcing back passes.

Still, there isn’t a team around that can keep the Vikings’ offensive weapons entirely silent.

“We definitely had some looks,” Schwan said.

Dons coach Paul Curtis credited the Vikings’ pressure with pushing the home team out of their normal style of play. The Vikings forced the Dons’ defensive line to give up the ball faster, which often put the ball in the air instead of on the ground.