Before the Oscars, Ruth Negga opens up about fashion and the future

In Los Angeles for the 89th Academy Awards, lead actress nominee Ruth Negga stepped into Bungalow 1 at Chateau Marmont on Friday night for a party hosted by Gemfields to celebrate a partnership with the actress and her stylist, Karla Welch.Through awards... 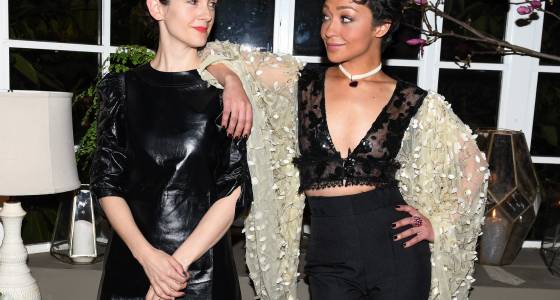 In Los Angeles for the 89th Academy Awards, lead actress nominee Ruth Negga stepped into Bungalow 1 at Chateau Marmont on Friday night for a party hosted by Gemfields to celebrate a partnership with the actress and her stylist, Karla Welch.

As the party started, Negga, nominated for her role in the interracial love-story biopic, “Loving,” talked jewels, fashion, style icons, her Hollywood future and what’s always in her handbag.

I like things that are different. Innovative. Maybe some people see that as risk, but I see it as exploring.

— Ruth Negga on her fashion style

“I don’t wear jewelry,” Negga said. “I mean, I hadn’t [until recently] because I read about how diamonds are sourced and was so horrified by it. Gemfields is attractive to me, because they are notoriously sustainable. Karla has taught me that anything is possible, but it can be done well, with the best intentions. Fashion doesn’t have to be about slaying things left, right and center.”

Pointing out that Negga’s ears aren’t even pierced so she requires clip-on earrings, Welch said, “Our main goal is to not use diamonds and to use color with stones that are ethically sourced. I love that Gemfields works with young, cool, indie designers, so there are so many options. For everyday looks, Ruth loves a ton of rings. She will wear five rings. That was something she totally brought into my vernacular.”

But the duo’s top-line approach to red carpet jewelry appears to be that less is more. “She’s a very petite person, so we don’t overdo it,” Welch said.

At the 2017 Golden Globes in January, 35-year-old Negga accessorized her custom Louis Vuitton column dress with a single Fred Leighton cuff bracelet, embellished with a 25.5-carat Gemfields ruby. Negga will wear jewelry designed with Gemfields stones to the Oscars, but wouldn’t offer further details about her look before Sunday’s main event.

“Fearless and fashion-forward” is how she described Negga’s style philosophy. “And she is a sleeve girl,” Welch declared, noting the “crazy-amazing” Rodarte bell-sleeved top as evidence. “There’s always a little bit of embellishment. She’s not a minimalist. But there’s an elegance to her, as well.”

However, Negga confessed she feels more aligned with Tulip O’Hare, the gun-wielding badass she plays in the comic-book-inspired AMC television series “Preacher” (Negga is currently filming season two in New Orleans) than with Mildred, her quiet, demure character in “Loving.”

“I would aspire to be Mildred, but I am a bit of a Tasmanian devil in my energies,” she said, noting that her hotel room was already a mess a 1 1/2 days into her stay. “I definitely think I’m more like Tulip in how I present myself to the world, but I’m sort of Mildred on the inside.”

Her go-to uniform off-set if she has to get dressed in 10 minutes, is “a long batwing dress that you can wear over jeans when you’re feeling a bit bloated,” she said. “Then I knock on some heels and these Abyssinian lion head drop earrings that a friend made for me.”

And her off-duty wardrobe tends to be devoid of color.

“In my everyday life, I’m afraid to say I stick to black,” Negga says. “I’m quite somber in what I wear because it’s most flattering. But I quite like Lou Doillon and Charlotte Gainsbourg [Jane Birkin’s daughters] and the French look, which is a bit androgynous. I’m not tall and slim but I think it can work. Like the styles on Jean Seberg in ‘Breathless,’ those kind of looks. And if I go out and have to dress up, I [channel] Dorothy Dandridge in the ’50s or Eartha Kitt, who I’m obsessed with. They are my style icons.”

Negga mentioned offhandedly that her handbag is always filled with “wrappers of various things,” including pomegranate-flavored Pur chewing gum. And she won’t leave home without Le Labo’s Santal perfume, Lancôme lip balm, under-eye concealer and her cellphone (“I would love to have it wheeled over by a 40-ton truck!” she joked).

When it comes to collaborating with Welch for her red carpet looks, Negga said they rarely disagree.

“She knows that I’m not a mainstream commercial person, to put it bluntly,” Negga said. “I like things that are different. Innovative. Maybe some people see that as risk, but I see it as exploring.”

The same might be said of her work. Asked if she’s working on any future film projects, Negga exclaimed, “No, none! My agent is standing right there, but I tell him that I just want to go on the straight and narrow. So much of being an actor is thinking about, ‘Oh my next role and my next role and my next role.’ I’m really enjoying being present at the moment. And this is so rare. To be in the moment where you actually have a job that’s paying you. I want to just be here and now. And be grateful for that.”