Maryland Democrats enlisted retired Rep. Barney Frank, one of the architects of the Dodd-Frank financial reforms, to bring some national party support to their latest proposal to hold the Trump administration to account.Democrats in the General Assembly are... 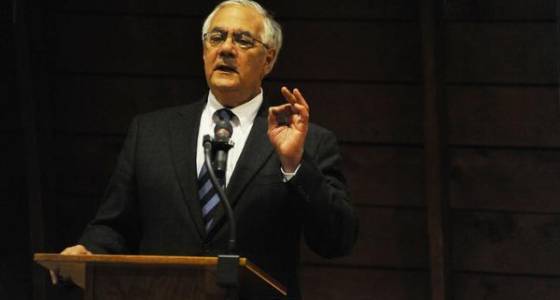 Maryland Democrats enlisted retired Rep. Barney Frank, one of the architects of the Dodd-Frank financial reforms, to bring some national party support to their latest proposal to hold the Trump administration to account.

Democrats in the General Assembly are proposing to create a commission to look out for moves in Washington to undo Dodd-Frank and other financial rules put into place as a response to the economy-wrecking housing crisis of 2008. President Donald J. Trump has said he thinks the regulations stop banks from being able to make as many loans, hurting businesses.

Del. Bill Frick, the House Majority leader and sponsor of the legislation, introduced Frank and an Obama-era Treasury official to a committee hearing as financial protection "luminaries."

Frank, who represented a district in Massachusetts for three decades before retiring in 2013, told Maryland lawmakers he appreciated their efforts. Frank has spoken out repeatedly in defense of the law he championed in recent weeks, but said it's the first time he's come to a state capitol to testify on a piece of legislation connected to it.

"I would hope it would be done widely because people tend to take certain things for granted," he told members of the House Economic Matters Committee.

State Democrats have been seeking ways to use the new president as a foil. Trump was deeply unpopular in Maryland in the November election and remains so, according to a poll released last week. With deep differences between many Democrats and the administration in Washington over policies — including on immigration, the environment and health care — state Democrats want to motivate supporters as they plot to unseat popular Republican Gov. Larry Hogan next year.

Congress is poised to roll back a measure on Friday long championed by Maryland Sen. Ben Cardin that requires oil and gas companies to disclose how much they pay to foreign governments -- a once bipartisan effort intended to reduce bribery and corruption.

The underlying law, which Cardin sponsored...

Congress is poised to roll back a measure on Friday long championed by Maryland Sen. Ben Cardin that requires oil and gas companies to disclose how much they pay to foreign governments -- a once bipartisan effort intended to reduce bribery and corruption.

The underlying law, which Cardin sponsored...

Ahead of Trump making an address to a joint session of Congress on Tuesday, more than 100 people rallied on Lawyers Mall by the State House in Annapolis, waving signs showing, variously, support for Planned Parenthood, backing of the Affordable Care Act and opposition to fracking.

The House of Delegates and the state Senate moved quickly this month to pass a resolution empowering Attorney General Brian E. Frosh to sue the federal government and have pressed the governor to take public positions on national issues. Democrats also back a suite of legislative measures to blunt the impacts of policy changes made by Trump, including a bill that would prohibit law enforcement agencies in Maryland from aiding deportation efforts.

The financial regulation commission idea is one modest part of that package. It would create a small body of lawmakers and members of the public to scrutinize moves in Washington to deregulate banks and other financial institutions and require it to report back to the General Assembly with ideas on how to blunt those changes. The commission itself would not have any regulatory powers.

Sen. Jim Rosapepe, the bill's sponsor in the upper chamber, said at a news conference that undoing the protections in the Dodd-Frank law would "unleash the wolves of Wall Street again."

"Delegate Frick and I have introduced this legislation to set up a watchdog to protect Marylanders from President Trump's plan to deregulate Wall Street and endanger Marylanders as we were endangered 10 years ago," he said.

"Checks and balances are keeping everything in line. The travel ban, guess what? The courts interceded and it stopped. People need to take a deep breath, and, again, let our ... members of Congress, let them do their job. Legislators in Annapolis, let them stay focused on issues in the state of Maryland."

Mileah Kromer, a political scientist who runs the Goucher Poll, said Democrats need to be careful to strike the right balance between taking positions on national issues while shaping policies that address the concerns of Maryland residents.

Polling results Kromer released Monday showed that about a quarter of respondents think Democrats in Maryland are spending too much time talking about Trump's early executive actions, with about a third saying they have the balance right and a further quarter saying they're doing too little. The risk, Kromer said, is nudging people from the second category into the first.

"They'll have to pick and choose their battles," she said.

Republican lawmakers and the governor's office have said that they're focused on Maryland and have urged their Democratic colleagues to follow suit.

Financial regulation also might be a poor vehicle for exciting voters. While banking policies have important economic consequences and have become a staple issue on the left, they're harder to grapple with than job creation programs or policies to revitalize manufacturing.

Frank, though, said there is a role states can play in keeping an eye on banks and setting rules for them to play by. Before the financial crisis, the federal government had taken much power away from the states, Frank said, but the Dodd-Frank bill handed a great deal of it back.

"We restored to the states significant power," Frank said.