When Wisconsin resident Julie Rider shops for groceries, there's one item she can't legally buy at her local market — or at any stores in her state.Because of a decades-old state law, Rider's favorite butter — Kerrygold, imported from Ireland — isn't... 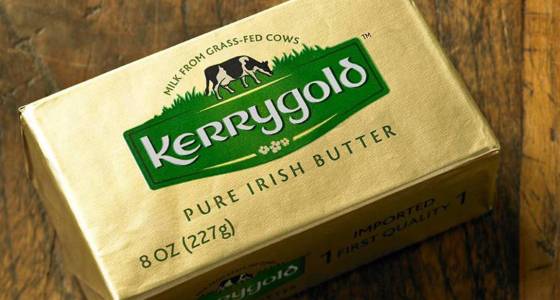 When Wisconsin resident Julie Rider shops for groceries, there's one item she can't legally buy at her local market — or at any stores in her state.

The law, requiring butter sold in Wisconsin to be graded for taste, texture and color through a federal or state system, effectively bans butter produced outside the U.S., as well as many artisanal butters that also aren't rated.

This means some residents of the Dairy State have to drive across the border into Illinois just to buy their favorite butter.

Whether Wisconsin’s law was intended as market protection for the state’s dairy industry or is simply a means to ensure quality, Rider, for one, thinks it’s “crazy.”

"You can go over the border into Illinois or Minnesota and (buy Kerrygold)," she said. "The dairy industry has a stranglehold on our legislators."

Rider, who lives outside Green Bay, gets around the law by buying her Irish butter online, but has heard friends talk of taking road trips to the Chicago area to get their Kerrygold fix.

Though the rule has been on the books since the 1950s, it is churning new controversy at a time when butter consumption is on the rise in America as it's increasingly thought to be healthier than margarine. Butter made from grass-fed cows, such as Kerrygold, is a staple in some diets and for the "bulletproof coffee" movement, where such butter is mixed with coffee and MCT oil for purported — but debated — weight-loss benefits.

Thieves at large, with 20,000 pounds of cheese, in Wisconsin Tribune news services

It's a caper of grand proportion in a state that loves its cheddar.

Police in southeastern Wisconsin say 20,000 pounds of cheese has vanished. The cheese, produced by U.S. Foods, was in a semitrailer parked at a business in the Milwaukee suburb of Oak Creek when it went missing Thursday.

It's a caper of grand proportion in a state that loves its cheddar.

Police in southeastern Wisconsin say 20,000 pounds of cheese has vanished. The cheese, produced by U.S. Foods, was in a semitrailer parked at a business in the Milwaukee suburb of Oak Creek when it went missing Thursday.

Word of Wisconsin's unique law spread across social media last week and into the Irish press. Photos on Twitter depicted Kerrygold being stockpiled in Wisconsin kitchens.

One Milwaukee woman, Sharon O'Neill, was inspired in recent days to create an online petition, calling on legislators to loosen the butter restrictions.

"This is butter, for Pete's sake," she said. Though a lifelong Wisconsin resident, O'Neill said she'd never heard of the law until recently and has started noticing Kerrygold disappearing from local store shelves.

She and her friends have started hoarding the product when they can find it, and plan to cross state lines to get more.

"I have a friend who has eight pounds in her freezer," she said. "I just bought six."

State officials say although the law may have been enacted to protect the state's dairy industry, it's not intended to ban any particular brand of butter. They're even in talks with Kerrygold and another Irish brand to open the state's market to the products, said Steve Ingham, administrator for the Wisconsin Department of Agriculture's Division of Food and Recreational Safety.

More than 40,000 pounds of cheese is under police protection in northern Wisconsin, evidence in one of two major dairy thefts in the past month in that state.

Was it a queso of mistaken identity? An incidence of gourmandise gone wild? Likely not, say the officers investigating the crimes.

More than 40,000 pounds of cheese is under police protection in northern Wisconsin, evidence in one of two major dairy thefts in the past month in that state.

Was it a queso of mistaken identity? An incidence of gourmandise gone wild? Likely not, say the officers investigating the crimes.

"We're not trying to keep them out," he said. "There's plenty of room in the food world."

"We're not a butter hit squad," he said.

Instead, the state periodically sends out letters informing retailers of the law, and a store operator will be notified if an inspector happens to see ungraded butter on a shelf.

A spokesman for the company that sells and markets Kerrygold in the U.S. and Canada, Evanston-based Ornua Foods North America, released a statement confirming it's "currently working with the Wisconsin authorities on a solution."

Kerrygold, its marketers point out, is graded in Ireland.

The fifth-generation owner of Ohio-based Minerva Dairy, Mueller says his distributors have told him they will no longer sell products to Wisconsin grocers because of the law — even though his butter has been available in the state since the 1990s.

As a smaller, artisanal dairy, Mueller said he can't afford to fly in someone on a weekly basis to grade his product, just so it can be sold in Wisconsin stores. Even if he could, Mueller said artisanal products like his "exceed" federal grading systems, so he wouldn't want to affix his butter with that seal.

"We make butter the same way it's always been made since ... before there was a USDA standard," he said. "We're concerned about (the law) because … if I can only reach a portion of the distributor's customers, that reduces my ability to stay with the distributor."

Michelle Kussow, executive vice president of the Wisconsin Grocers Association, said she hasn't heard of any pending legislation, but her organization would likely support a bill if it doesn't affect food safety standards.

Any butter debate at the state capitol would not be the first. In 2011, there was a failed proposal to repeal a law that bans restaurants from substituting margarine for butter without a specific request to do so. The law also says state prisons, schools and hospitals may not swap out butter for margarine except for health-related reasons.

The state used to have much more stringent rules related to margarine. It was illegal to sell margarine that was dyed yellow to look like butter, resulting in runs across state lines and illegal sales at liquor stores, according to reports. Eventually, those laws were adjusted, along with the popularity of margarine.

"We now consume more butter than margarine," said Patrick Geoghegan, spokesman for the Wisconsin Milk Marketing Board, noting that at one point Americans did the opposite. The industry group reports that butter consumption has risen 25 percent in the past decade. "Fortunately, all is right in the world again. We make amazing butter in Wisconsin."