Listening to a song from the Baltimore-Washington indie-rock quintet Sunbathers, singer Sean Lynott’s falsetto sounds effortless. The Catonsville native credits it to a childhood obsession he latched onto early. Maybe too early.“You know, the biggest... 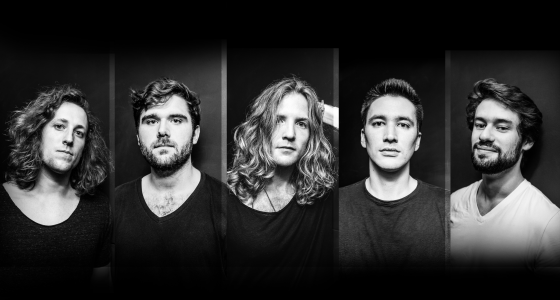 Listening to a song from the Baltimore-Washington indie-rock quintet Sunbathers, singer Sean Lynott’s falsetto sounds effortless. The Catonsville native credits it to a childhood obsession he latched onto early. Maybe too early.

“You know, the biggest influence on me was Usher,” Lynott said inside a Mount Vernon cafe last week. “I mimicked him, walking around my house singing Usher songs that were far too inappropriate for an 8-year-old. I just learned to sing through that style.”

To be clear, Sunbathers — who headline Metro Gallery on Friday — won’t get confused for an R&B group, but Lynott’s love of the genre speaks to the band’s open-minded approach to indie-rock, a sound that continues to grow more amorphous. On their self-titled EP from 2015, Sunbathers find a polished balance between songs driven by soaring guitars and more experimental tracks utilizing synthesizers and electronic production techniques.

Now they’re ready to further mine the latter style’s possibilities.

“We definitely made a concerted shift to bring those things into our music because I think we’re all interested in it,” said Lynott, 26. “With the EP, we just didn’t know how to do it. Now that we’re exploring it, it just opens up a whole new world of sounds and ideas.”

They’ve made progress in a relatively short period of time. As seniors and roommates at the University of Maryland, College Park, Lynott and guitarist Tim Boaté began playing music together as an acoustic duo (“a little bit of covers, a little bit of our own stuff,” according to Lynott).

Based on their formative music tastes, there was no guarantee it would work. Lynott “grew up on Warped Tour-style pop-punk,” while West Chester, Pa., native Boaté grew up on Phish and the Grateful Dead, thanks to his older siblings.

These are the top upcoming Baltimore-area concerts. For additional concerts, see baltimoresun.com/events. For more music coverage, check out Midnight Sun.

Writing together, though, eventually led to common ground.

“That’s where we collide: Phoenix, My Morning Jacket, Radiohead,” said the 26-year-old Boaté, seated next to Lynott.

After graduation, they moved to Washington’s H Street neighborhood with one goal: Start a serious band. They eventually recruited guitarist-backup singer Pete Mindnich, drummer Shohsei Oda and bassist Peter Leonard. (Lynott and Boaté live in Baltimore, while Mindnich and Oda live in Washington. Leonard is in Chevy Chase, and the group practices in the Catonsville basement of Lynott’s parents’ house.)

In November 2015, the band released their debut five-track EP, which Boaté describes as “a culmination of our first two years as a band.” Recorded at Dreamcatcher Studio in Baltimore with producer Donny Ingram, songs like “Intimacy” and “Glory” sound festival-ready — propulsive, danceable and catchy enough to find an audience that grew up listening to a little bit of everything.

“People seemed to really latch on to that one,” said Boaté, who lives in Canton. “We really like that sound, so we might as well keep going. It’s working.”

Thematically, Sunbathers’ songs “can be boiled down to love songs,” but Lynott said he tries to inject nuance with moments of desperation and the other complicated feelings that come with relationships. The former English major often finds inspiration in poetry and novels, citing Saeed Jones’ “Prelude to Bruise” and Nayyirah Waheed’s “Salt” as recent favorites.

“I find a lot from poets — just the way they break phrases apart and the way certain words carry different meanings in different contexts,” the Mount Vernon resident said.

The group has found a high-profile fan in WTMD, Towson University’s public radio station, as evidenced by the station’s regular playing of “Glory.” The station invited the band to play its Baltimore Band Block Party last May, which led to a slot at WTMD’s popular free concert series First Thursdays in Canton the following month.

The performance “marked a next step for us,” Boaté said.

“I remember playing our second-to-last song, and I just took a moment to take it all in, like, ‘Look at all these people,’” Lynott said. “It was nothing short of surreal.”

They’re going to keep pursuing those moments, with hopes of soon expanding their touring schedule to include New York and Virginia. (Sunbathers have mostly stuck to Baltimore, D.C., and Philadelphia so far.)

The Metro Gallery show will be their last in the area for a few months. They plan to take the time to finish writing and recording new material, which will either end up on a second EP or a full-length album.

The band has achieved a fair amount in just over three years, and Lynott says the plan to “see how far we can take it.”

“We’ve been fortunate enough to have very positive experiences as a band,” Lynott said. “I don’t see any reason to stop.”