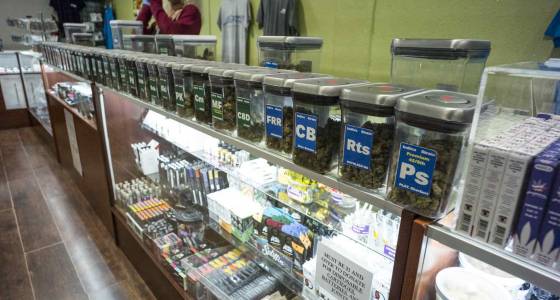 But many of those businesses pay no city taxes. And none of them are licensed, with little teeth in current city law to go after rogue shops that pop up faster than authorities can shut them down.

Two competing measures on the ballot March 7 – Measure M and Measure N – aim to change that.

Both measures would allow the city to license marijuana businesses for the first time, impose new taxes, create stiffer penalties for illicit shops and pave the way for recreational marijuana sales.

Measure N, which was drafted by a cannabis trade group, made the ballot first. It’s a lengthy measure that favors existing shops while laying out detailed regulations for where and how businesses could operate.

The city put Measure M on the ballot to counter the trade group’s effort. Measure M is a brief and flexible plan that gives the City Council power – after gathering input at public hearings – to create a licensing scheme and operating rules for marijuana businesses.

Measure M has the clear edge heading toward Election Day, with endorsements from law enforcement, community leaders and area newspapers stacking up.

Even the trade group that authored Prop. N has abandoned their proposal, throwing their support to city-backed Prop. M.

“It is not an easy issue to deal with,” said L.A. City Council President Herb Wesson, who spearheaded Measure M. “But we believe this measure is very fair. Seeing that the lion’s share of the industry is supportive of it I would think sends a message that we did reach out, and we are trying to come up with something that everyone can live with.”

While voters have favored regulated marijuana markets in recent elections, Measure M still faces some challenges. Turnout for local primaries is always low – and may be particularly down March 7 thanks to political fatigue after such a bitter presidential contest. Having two marijuana measures on the ballot is also likely to cause some confusion, which often leads voters to shoot both down.

But the Southern California Coalition, a cannabis industry group that worked with the City Council to draft Measure M, said polling shows the measure should pass, with Wesson and industry leaders adding that they’re cautiously optimistic.

“I think the L.A. marijuana lobbies are pretty well organized and well funded,” Gormley said. “So I do believe we’ll have a good voter turnout and I do believe it will fall in our favor.”

Californians voted to decriminalize medical marijuana in 1996. For the next decade, Los Angeles did little to regulate the dispensaries, cultivators, manufacturers and delivery services that claimed the right to operate under that vague state law.

The L.A. City Council in 2007 finally passed an ordinance to block all new marijuana businesses. But that triggered a rash of lawsuits against the city while the number of shops continued to skyrocket, prompting voters in 2013 to approve Proposition D. The measure gave 135 medical marijuana dispensaries “limited immunity” from prosecution, but didn’t actually license those shops or give the city power to regulate other cannabis businesses.

“I do think L.A. city needs to clean up what’s going on,” said David Dinenberg, founder of L.A.-based KIND Financial, which makes software for the cannabis industry. “Regulation is a necessary evil in every industry – especially in the cannabis space.”

California finally began attempting to rein in the state’s unruly medical marijuana program in 2015 through a trio of bills that require licensing, testing and more. Then voters in November approved Proposition 64, legalizing recreational marijuana under a similar regulatory scheme.

Both Prop. 64 and the medical marijuana regulations let cities decide which – if any – businesses can set up shop in their borders, plus let them impose additional regulations and taxes as they see fit. So if any businesses want to get state licenses to operate once those become available around Jan. 1, 2018, they first need a local license.

The problem is that Los Angeles can’t issue marijuana licenses under voter-approved Prop. D. That means if the city doesn’t act before Jan. 1, no local marijuana businesses will be allowed to get state licenses to lawfully operate.

That’s where Measure M and Measure N come into play.

Angelenos ended up with two measures on the ballot courtesy of a familiar pattern that often plays out at the local level.

When a city is slow to tackle a hot-button issue, a special interest group seizes the opportunity to get a measure on the ballot that benefits its own players. The city responds by hurrying to craft a competing measure. Then the special interest group abandons its initiative, pleased to have forced some reform and knowing the city effort is more likely to win.

That’s how marijuana policies changed recently in Costa Mesa, Santa Ana and Long Beach. And it’s how change is poised to happen March 7 in Los Angeles.

The United Cannabis Business Alliance qualified Measure N for the ballot back in October. Since the trade group represents existing dispensaries in the city, the measure predictably pitched grandfathering those shops in and giving them a monopoly out of the gate, while also allowing the city to permit other types of marijuana businesses and adding a tax for recreational shops.

Wesson said he’d already been working for months with stakeholders on the city’s own initiative, with plans to put the measure before voters during the May election. But once Measure N made the ballot for the March primary, he said they were forced to get their measure ready so they could counter that effort.

“I just didn’t feel comfortable with letting an industry regulate itself,” Wesson said.

The United Cannabis Business Alliance now supports Measure M. That decision came too late to pull their measure from the ballot, but the group was able to include a statement in the voter information pamphlet urging voters to back the city measure.

“There has been no organized opposition,” said Adam Spiker, executive director of the Southern California Coalition.

Spiker believes that’s because his group spent months working with the City Council to host town halls and gather input from stakeholders. That’s earned Prop. M the support of L.A. Police Chief Charlie Beck, the head of the L.A. Business Council and the president of the NAACP’s L.A. chapter, among others. And editorial boards for the Los Angeles Times, L.A. Daily News and LA Weekly have all endorsed the measure.

If both measure still get more than 50 percent of the vote March 7, the one with the most votes wins.

MORE WORK TO BE DONE

The real work will begin if M passes, Wesson said, since the measure allows the City Council to “put the meat on the bones” after the election.

“There are just so many conversations yet to be had,” he said.

The council will have until Sept. 30 to draft detailed regulations for the industry. That includes answering tough questions such as where businesses can operate and how many dispensary licenses will be available. Both Wesson and Spiker said they expect there will be licenses for more than just the 135 shops that are pseudo-legal today, but nowhere near enough to legalize the 1,000 or more shops thought to now be open in the city.

Wesson said they plan to hold multiple public hearings before they start issuing licenses, with officials from Washington, Oregon and Colorado sched uled to share insights from their experience with regulating the industry during meetings in March.

“We would not want to do something of this importance without feeling that we really did a hell of a job getting citizen participation,” he said.

Industry insiders backing Measure M are trusting city leaders to craft policies that are strict enough to help curtail the black market without being so onerous that they’ll put legitimate players out of business.

Dinenberg said he’s met with city officials to discuss those issues and has been pleased with their responsiveness. And if Prop. M passes, he plans to keep working with the city to help shape the coming regulations.

“Los Angeles has been very open about asking for input,” Dinenberg said. “We’re going to be learning a lot over the next six to nine months.”