CLEVELAND, Ohio - Thank your iPod's "shuffle" function for the offbeat prelude to this year's Baldwin Wallace University Bach Festival. Had it not been for the randomization ability of his MP3 player, festival director Dirk Garner likely never would have... 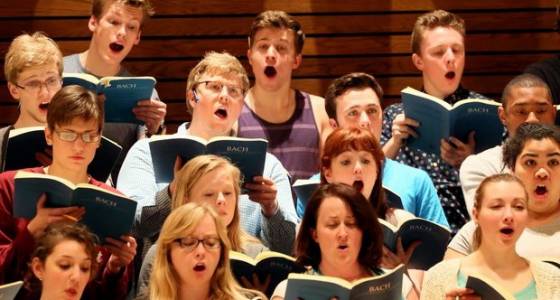 Had it not been for the randomization ability of his MP3 player, festival director Dirk Garner likely never would have conceived of "Out of the Bachs," an eclectic and unlikely evening combining visual art and dance with the music of Brahms and Cole Porter.

"I don't make many distinctions in genre," Garner explained. "I just don't experience music that way. It's all part of the same thing for me."

Out of the Bachs

What: An evening of music, art, and dance.

Indeed it is, and here's the proof.

An avid cook, Garner was listening to music one evening while working in his kitchen when the magic of the "shuffle" struck him and inspired him to capture that sense of surprise in concert.

What he came up with is certainly unpredictable. Without a detailed program book, no listener this Friday at 78th Street Studios - only the second offsite Bach Festival event location - will have any sense of what's coming.

Actually, that's not quite true. One thing certain not to be on the program is Bach. (Don't worry. There's plenty of Bach on other festival concerts.)

All you need to know is that in preparation for Brahms' Requiem, the centerpiece of this year's Bach Festival, singers and pianists will contrast selections from Brahms' Liebeslieder Waltzes with songs by Cole Porter.

"There's this continuous flow to the whole evening," Garner said. "It's pretty subtle, but they're all love songs.

"We're trying to create that link for people, show them how much Bach influenced Brahms. It doesn't even seem like fusion to me. It just seems natural, like the music inside my head."

Not everyone shares that vision of the musical world. There are those who see no reason for anything but Bach on the Bach Festival, who blanch at anything they perceive as tampering with the event's now 85-year-old traditions.

Far more, though, embrace Garner's eclecticism and his updates to the Bach Festival. Most, he said, see too-tight restraints on the festival as disservices to Bach, the festival and the public. "To have a Bach festival and only play Bach is like having electricity and stopping at the light bulb," he said.

"There are lots of ways to do this music, and I think we have an equal responsibility to make what we're doing - our music - relevant to this world."