Galleries Videos CONTACT ADVERTISE
Famagusta 30°
few clouds
BUSINESS EDUCATION ENTERTAINMENT HEALTH POLITICS SCIENCE SPORTS TECHNOLOGY
12:08 Guide To Online Sports Betting: How To Choose A Sportsbook
08:28 What Are Some Reasons to Consult a Brain Injury Lawyer?
09:24 Blockchain Solutions for Enterprises: How To Increase Efficiency And Profitability
07:06 How To Deal With A Car Crash In New York
17:43 Tips to keep in mind while choosing the casino site
11:34 Relation Between Employee Theft and Pre-employment Screening Check
04:37 Search your own desired site to play sports for betting
18:00 Top 3 Career Path Options for Business Analysts Preview
15:35 The history of Imen Jane, who is the influencer and the charges on the...
18:48 Sebastian Vettel's Greatest Races
BIST
1129
GOLD
455.632
USD
7.6082
GPB
9.7597
EUR
8.8483
Breaking News
Top 3 Career Path Options for Business Analysts Preview
Close

The B-17 Flying Fortress humming through the sky and its pervasive smell of fuel really brought back the memories for Jim Street, staring out the cockpit windows Tuesday afternoon over Hillsboro. "Every mission, there was something," Street says. ... 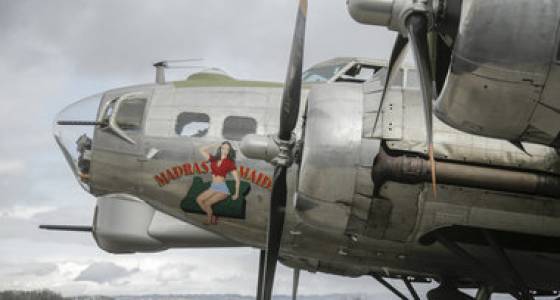 The B-17 Flying Fortress humming through the sky and its pervasive smell of fuel really brought back the memories for Jim Street, staring out the cockpit windows Tuesday afternoon over Hillsboro.

"Every mission, there was something," Street says.

Through 35 of those missions as a bomber pilot, he and his crew did their job during WWII. He laughs that people called him a "high school dropout." At age 18, a senior in high school, he enlisted.

He remembers the time over Vienna when he lost two of his engines on a bombing run over an oil refinery. They dropped the ball turret and took a long glide over the Alps with the two remaining engines working. After three of the engines were replaced, they were back up in that warbird.

Over the years, his crew met up for reunions. In 1994, he rode in another B-17 during a memorable Portland gathering.

"The entire crew was there," he remembers. "They were like a bunch of kids exploring the plane!"

Now, on the tarmac at Hillsboro Airport, he stops and gazes at the B-17 in front of him, that "beautiful bird." It's the friendships tugging at him.

"They're all dead. I'm the last one," Street explains. He says today's ride through the perfect Oregon winter's sky was a tribute to his comrades.