Authors galore at the library in March: Community Voices

Noteworthy authors will be appearing at Cuyahoga County Public Library (CCPL) throughout the month of March. Cleveland's own Brad Ricca will visit the South Euclid-Lyndhurst Branch on March 13 to discuss his new book, "Mrs.... 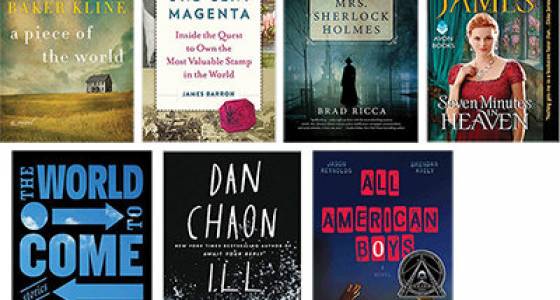 Noteworthy authors will be appearing at Cuyahoga County Public Library (CCPL) throughout the month of March.

Historical romance queen Eloisa James will appear on March 16 at CCPL's Parma Branch. Her latest work, the critically-acclaimed "Seven Minutes in Heaven," is the final installment in the popular Desperate Duchesses by the Numbers series.

Christina Baker Kline, best-selling author of the smash-hit "Orphan Train," will visit the Parma-Snow Branch on March 20. Kline's latest book, "A Piece of the World," is a stunning novel of friendship, passion and art, inspired by Andrew Wyeth's mysterious and iconic painting "Christina's World."

Dan Chaon is the acclaimed author of "Stay Awake," "Await Your Reply," "You Remind Me of Me" and "Among the Missing," which was a finalist for the National Book Award. Chaon will visit the Parma-Snow Branch on March 22 to discuss his thrilling new book, "Ill Will."

Learn about the obsessive, secretive and often bizarre world of high-profile stamp collecting on March 25 at the Brecksville Branch. New York Times reporter James Barron will be on-site for a discussion of "The One-Cent Magenta: Inside the Quest to Own the Most Valuable Stamp in the World."

Called "the most ambitious story writer in America" by the Daily Beast, Jim Shepard will visit the library's Beachwood Branch on March 29 to discuss his new collection, "The World to Come: Stories."

Books will be available for purchase and signing after each program. Register for the event(s) online or by calling the host branch.