The ATF is alleging that an employee of the city-funded violence intervention program Safe Streets was using its offices and his company cell phone to lead a drug trafficking organization involved in "several" shootings, authorities say in new court... 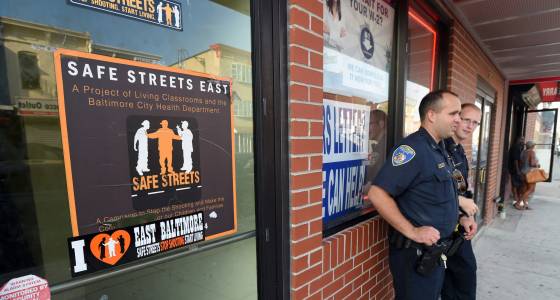 The ATF is alleging that an employee of the city-funded violence intervention program Safe Streets was using its offices and his company cell phone to lead a drug trafficking organization involved in "several" shootings, authorities say in new court documents.

A complaint charging Terrell Allen, 43, with distribution and possession with intent to distribute drugs was unsealed Friday in U.S. District Court in Baltimore, two days after his arrest. Authorities allege Allen was overseeing a drug organization operating in the Latrobe Homes area.

Among the locations watched by agents was the Safe Streets office in McElderry Park, authorities say. Agents also wiretapped his phone, which was registered to the Living Classrooms Foundation, the operator of the McElderry Park site. Allen had no attorney listed in court records Monday.

The allegations are the latest for the Safe Streets program's McElderry Park site, which has twice been shut down and investigated after law enforcement made allegations of criminal activity.

Safe Streets hires ex-offenders to use their credibility on the streets to mediate disputes and prevent violence, out of the view of law enforcement, and city officials say it has been successful in cutting down violence in historically troubled areas. The area covered by the McElderry Park Safe Streets site has gone 116 days without a gun homicide, according to the Health Department web site.

City officials are reopening East Baltimore's Safe Streets program, which closed in July when guns and drugs were found stashed in the office.

City officials are reopening East Baltimore's Safe Streets program, which closed in July when guns and drugs were found stashed in the office.

The Health Department said Allen was employed by the Living Classrooms Foundation, and said it was "closely monitoring" the case. Health Commissioner Dr. Leana Wen said in a statement that the overall program has been proven to save lives.

"This model works because of our employees," Wen said. "Safe Streets hires many individuals with criminal backgrounds, giving returned citizens a second chance by supporting the very neighborhoods they are from. Our outreach workers have truly walked in the shoes of the people they serve."

The Living Classrooms Foundation could not immediately be reached for comment.

Police said a robbery investigation led them to the office, and two employees were among those arrested....

Police said a robbery investigation led them to the office, and two employees were among those arrested....

Allen was previously targeted by the ATF, with authorities alleging he was part of a drug organization whose feuding with rivals included the abduction of a rival dealer's younger brothers and a wave of retaliatory shootings and killings.

In a search warrant filed in 2008, federal authorities said Allen was believed to be one of three men who abducted the younger brothers of Stephen "J.R." Blackwell after a dispute over heroin prices. The ATF said a confidential source told them Blackwell paid Allen and another man a $500,000 ransom for their release.

Six weeks later, gunmen took revenge with a quadruple shooting outside the Allen & Family Appliance store in East Baltimore. Allen's father and another man were killed, and Allen was injured. Several associates of Blackwell were killed in the ensuing months, and a shooting broke out during a memorial cookout to commemorate their deaths. Twelve people were shot and wounded, including Blackwell.

Agents laid out the allegations regarding the feud in an affidavit that charged Allen with being a felon in possession of ammunition, a charge that landed him in federal prison for four years. But Allen was never charged in connection with any of the violence, and his attorney at the time said the information contained in the affidavit was "invented."

Blackwell is serving a 20-year federal prison sentence on drug conspiracy and money laundering charges. He was also never charged in connection with the violence.

Allen is one of at least six people charged in the latest investigation, during which authorities said they intercepted hundreds of calls between Allen and other alleged members of the drug organization.

In one call, they say Allen can be heard saying he wants to acquire "two to three ounces" of "that Miley Cyrus," which the agents say is believed to refer to cocaine. At one point, police pulled him over after returning from New York City, though only a small amount of cutting agents and "wax bindles," commonly used to package drugs, were recovered.

Though the affidavit makes references to violence, and quotes members of the organization allegedly discussing weapons, it does not make any specific allegations regarding shootings or the organization's supposed role.

A review by Johns Hopkins found Safe Streets "has had a larger effect on reducing non-fatal shootings than any other single public safety strategy in Baltimore."

The McElderry Park location is the city's longest-running, but has also run into trouble.

In 2015, police chased two robbery suspects into the Safe Streets office, where they found guns and drugs stashed in closets and the ceiling. Two Safe Streets employees were charged. The program was suspended pending a review by the Health Department.

Before that, the program was also shut down for a review in 2010, after the Drug Enforcement Administration said that the East Side Safe Streets program is "controlled" by the Black Guerrilla Family gang and helped gang members get jobs after their release from prison.

No one from Safe Streets was charged as part of the 2010 indictment that contained the allegation, and in the 2015 case prosecutors eventually dropped all charges against all nine people arrested.