CaptionCloseGuns are famously easy to come by in the United States.It’s often noted that they are easier to get than a job or an education. America has more guns in private hands than adult residents. Even for people legally prohibited from possessing... 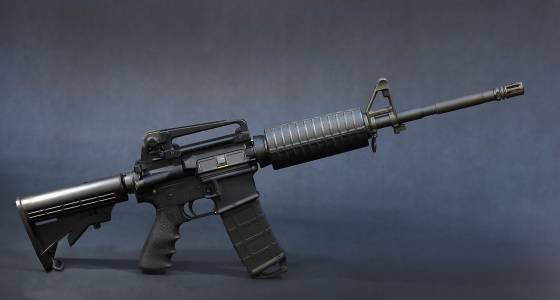 Guns are famously easy to come by in the United States.

It’s often noted that they are easier to get than a job or an education. America has more guns in private hands than adult residents. Even for people legally prohibited from possessing firearms, there is usually only one minor barrier to ownership – cost.

Now, though, federal prosecutors in Seattle claim a Canadian huckster, in the United States illegally, was able to avoid even that low hurdle. On three occasions, they say, gun dealers extended to him same-day store credit that he then used to buy guns he wasn’t allowed to have.

Indicted on two firearms-related counts, Slayter, 52, is accused of possessing that rifle while in the United States illegally. He is also accused of using a fake ID to buy the assault weapon at Bass Pro Shops in Tacoma.

Writing in court papers, a Bureau of Alcohol, Tobacco, Firearms and Explosives agent said Slayter drew federal attention in January when he left ammunition, rifle magazines and a gun case behind after checking out of an Everett Days Inn.

Slayter had been staying at the hotel after registering using a forged Texas driver’s license, the ATF agent said in charging papers. Hotel staff called police on Jan. 25 after finding the ammunition and gun accessories, prompting Homeland Security Investigations agents to examine the items.

Investigators found a Pennsylvania driver’s license issued under another name, as well as receipts showing that Bass Pro Shops in Tacoma had extended a credit line to a third alias, the ATF agent continued. Investigators found a notepad with names and birthdates written on it as well.

The following day, investigators visited the Bass Pro Shops store and found that a Black Rain Ordinance rifle had indeed been sold to a person using one of the aliases. The purchaser – federal prosecutors claim him to be Slayter – used a bogus Washington driver’s license after opening a Bass Pro Shops MasterCard account. According to charging papers, Slayter bought two magazines, ammunition, a rifle scope and four $352 gift cards on store credit as well.

Surveillance video of the sale showed a man, wearing a hat decorated with the American flag, making the purchase. A similar hat was found in the Days Inn hotel room.

According to a new study, even though the U.S. has the highest death rate from firearms of any developed country, gun violence does not get a whole lot of attention in government research compared to other leading causes of death in the country. Researchers led by Dr.

The name on the Washington driver’s license did not match state Department of Licensing records, leading investigators to conclude that it was a fake.

Investigators were able to locate a Facebook page for Slayter that showed him to be Canadian, according to charging papers. They determined he legally entered the United States in 2014 but had been required to leave within six months.

Slayter was arrested on Jan. 27 in Tukwila on suspicion of immigration violations. According to charging papers, Slayter admitted to buying the rifle under a fake name.

“When asked why he had used a different name to purchase the rifle, Slayter said it was because he was in the United States illegally,” the ATF agent said in charging papers. “Slayter also admitted opening the credit account in (the alias’s) name."

Slayter is expected to appear for arraignment Thursday in U.S. District Court at Seattle. He remains jailed at the SeaTac Federal Detention Center.