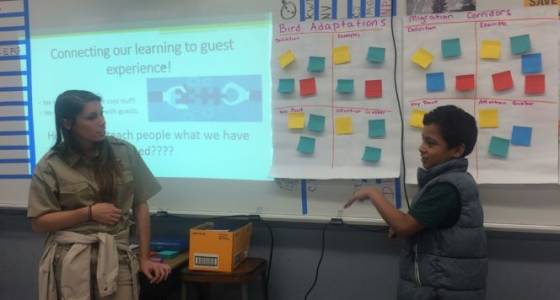 Jovani Encarnacion, 14, wants to be a zoologist but he's not waiting until college to start studying.

Since November, Encarnacion and several other students have worked closely with Lowry instructors to build a flower garden on school grounds and improve signage at the zoo for its recently renovated Florida Aviary.

Students learn how to protect Florida's endangered wildlife and the effect people have on the environment. Activities include field trips to the zoo, the Florida Aquarium, and local waterways.

So far, the club is a hit with Jovani.

"All these activities are really fun," he said.

"It's awesome," he said. "I get to help other people understand nature and protect the environment."

"We try to make it as interactive and hands-on as possible," she said. "It's fun and enhances the learning."

Students' participation in the club will be a bonus for them because the skills and knowledge students learn there will transfer to the classroom, said science teacher David Seis.

"It will show up later in the year," he said.

AT&T recently donated $25,000 to the club, which is part of the company's signature philanthropic initiative, AT&T Aspire, which drives innovation in education to promote student success in school and beyond.

Additionally, initiatives like the STEM club offer students like Jovani and Angelo an introduction to science and technology careers, he said.

"When you think of jobs of the future … those jobs are in STEM fields," Narain said.