Chris Dickerson is fighting for one of the few available outfield spots on the Orioles’ Opening Day roster this spring, hoping to extend his major league career at the age of 34.He hasn’t played in a big league game since September 2014. And his recovery... 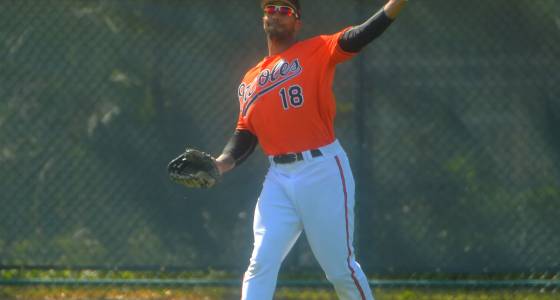 Chris Dickerson is fighting for one of the few available outfield spots on the Orioles’ Opening Day roster this spring, hoping to extend his major league career at the age of 34.

He hasn’t played in a big league game since September 2014. And his recovery from left shoulder surgery in June 2015 left him without an organization through all of last season before the Orioles, in need of better outfield defense, signed him to a minor league deal in August.

Dickerson returned this season on a minor league deal and is one of 13 outfielders in camp. His play five games into the Grapefruit League schedule has raised some eyebrows.

The Orioles realize the kind of asset Dickerson can potentially be. He played 56 games with them in 2013, hitting .238/.266/.400 including his first career walk-off homer on May 31 against the Detroit Tigers at Camden Yards. He also provided solid defense with the Orioles, with three defensive runs saved playing 28 games in the outfield.

“He’s a piece,” Orioles manager Buck Showalter said. “He can defend at three positions. He’s made three or four plays down here not many people make already. He’s a plus runner. He’s not afraid to go. He still runs well. He’s another depth guy for us, and sometimes those guys work into more of the picture than that.”

But at this time last year, Dickerson realized he had to prepare for life after his playing career, which spanned seven different organizations. In the summer, he pursued a future in broadcasting, but it didn’t feel right.

“When you’re out of the game and you’re done, it’s like you have to have some [sense of reality]. … “There are some serious moments when you kind of look at yourself like, a.) How did I get here, and b.) What do I have to do to get back? But why did I last this long? So it’s about managing the positives with the negatives. But I think depending on how you look at it, I think there is some light in the darkness.”

Thinking back to why he remained unsigned for most of last season, Dickerson said that last offseason he realized he needed to show teams he was healthy, so he played winter ball in the Dominican Republic. But Dickerson said he probably came back too soon.

“I rushed it,” Dickerson said. “The first game, I made 12 throws from the outfield and that was it. I didn’t throw for the rest of the time I was there and I probably set myself back a couple months. That was my main focus, was to get healthy and get that bat going.”

At the invitation of Orioles center fielder Adam Jones, Dickerson, a Los Angeles native, showed up at Dodger Stadium during the team’s interleague series there last July.

“I was kind of asking, ‘What’s he doing in street clothes?’” Showalter said. “Chris is an impressive athlete, this guy is 6-3, 230 pounds with a body fat of six [percent]. He’s got five tools. He had some injuries he was fighting his way through and just never got to the point where somebody was willing to rehab him and do all the stuff to get him to this point.

“So, he was a guy that we really targeted last year. [Vice president of baseball operations Brady Anderson’s] got a great relationship with him, stays in touch with him. Just felt like he’s one of those guys that slips through the cracks a lot of time. He was a big contributor for us a couple of years ago. He stays in great shape. … I told him to get ready to go and we’ll see you in the spring.”

Dickerson signed a minor league deal a month later and reported to Double-A Bowie, playing out the final few weeks of the season there hitting .322/.385/.610 in 15 games. He earned an invitation to the Orioles’ spring training complex in Sarasota to work out with a group of minor leaguers who could be potentially added in September. He didn’t get called up, but it gave Dickerson clarity that maybe his playing career wasn’t over.

“Getting back and just working my [butt] off to get my shoulder back, and even that [is something],” he said. “When I got back to Baltimore, the doctor even said, he was looking at the X-rays like, ‘You shouldn’t be able to throw again.’ So it’s kind of motivation, not so much to come out here and prove naysayers wrong, but to prove myself right, that I can still come out and play at a high level and be an impact player.”

He returned to the organization this past offseason on a minor league deal and is having a strong spring. He already has a reputation as a quality defender — the club wants to get better defensively in the outfield, also signing veterans Craig Gentry and Michael Bourn to minor league deals with that focus — and the Orioles know his capabilities from having him four years ago. But Dickerson said his focus has been on getting his bat going.

Dickerson hit his first spring training homer Tuesday, off closer Jeanmar Gomez in the Orioles’ 7-5 loss to the Philadelphia Phillies in Clearwater. Dickerson is 1-for-5 with two walks this spring. He has also shown his ability to contribute defensively. On Tuesday, he cut off Howie Kendrick’s double down the right-field line and nearly threw him out at second base.

“That’s a big throw, and he’s also playing fearlessly,” Showalter said. “The ball that got in front of him yesterday, how many guys in spring training will attempt that ball? He’s trying to make the club, and he’s wanting us to show us how, and he’s playing with his hair on fire.”

“They talked about when the game is done,” Dickerson said. “Yeah, it’s real.

“[I] kind of come in here with a purpose. I’m just trying to play my game, and that’s play good defense and try to string together some good ABs, and I think I’ve done that. I just notice I’m seeing the ball really well and getting in a nice rhythm, which is the most important [thing] the first couple of days. I have a good base, it’s early, so I’m just looking to build on this so far.”