Galleries Videos CONTACT ADVERTISE
Famagusta 30°
few clouds
BUSINESS EDUCATION ENTERTAINMENT HEALTH POLITICS SCIENCE SPORTS TECHNOLOGY
12:08 Guide To Online Sports Betting: How To Choose A Sportsbook
08:28 What Are Some Reasons to Consult a Brain Injury Lawyer?
09:24 Blockchain Solutions for Enterprises: How To Increase Efficiency And Profitability
07:06 How To Deal With A Car Crash In New York
17:43 Tips to keep in mind while choosing the casino site
11:34 Relation Between Employee Theft and Pre-employment Screening Check
04:37 Search your own desired site to play sports for betting
18:00 Top 3 Career Path Options for Business Analysts Preview
15:35 The history of Imen Jane, who is the influencer and the charges on the...
18:48 Sebastian Vettel's Greatest Races
BIST
1130
GOLD
457.292
USD
7.6158
GPB
9.7751
EUR
8.8605
Breaking News
Top 3 Career Path Options for Business Analysts Preview
Close

At a funeral pyre in India, anger over a shooting in Kansas

HYDERABAD, India – Just after 2 p.m. Indian Standard Time on Tuesday, the body of Srinivas Kuchibhotla, an Indian immigrant fatally shot in a bar outside Kansas City, Kan., was placed on a pyre made of logs.Grains of rice were placed around his mouth, in... 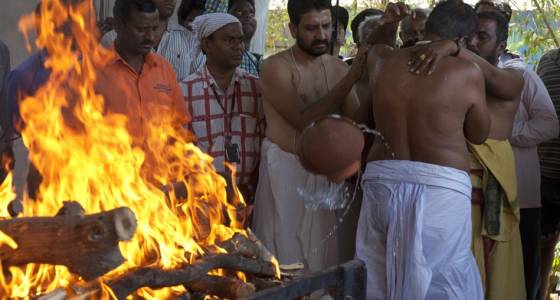 HYDERABAD, India – Just after 2 p.m. Indian Standard Time on Tuesday, the body of Srinivas Kuchibhotla, an Indian immigrant fatally shot in a bar outside Kansas City, Kan., was placed on a pyre made of logs.

Grains of rice were placed around his mouth, in accordance with Hindu tradition, to signify his last earthly meal, and his forehead was smeared with sandalwood paste. His father poured clarified butter on his head as a sign of purification, and used a burning stick to light the fire.

But before the ancient rituals could be completed, a cluster of young mourners — mostly information technology professionals or engineers, like the dead man — began shouting. "Trump, down, down!" they said. "Down with racism! Down with hatred!"

Here in Hyderabad, a city so immigration-minded that a particular temple deity is believed to help grant U.S. visas, Kuchibhotla's violent death is seen by many as a harbinger of rising anti-immigrant feeling in the U.S.

Last Wednesday, a 51-year-old white Navy veteran confronted Kuchibhotla, 32, and another Indian patron at a bar in Olathe, Kan., questioned them belligerently about their visa status and, after being asked to leave, returned with a gun and shot them. The other man, Alok Madasani, 32, was injured. The attack also wounded a third man who apparently tried to intervene.

Authorities are investigating the shooting as a hate crime, the FBI said Tuesday. Sunaina Dumala grieved over the body of her husband, Srinivas Kuchibhotla, on Tuesday. A cousin attending the funeral said the pair had recently purchased their first home.

In the days since, Indians have been watching raptly for signs that Trump acknowledges what a blow it has been to immigrants' sense of security. Trump's silence on the killing has been the subject of angry editorials in most of India's major daily newspapers.

"Hate has a way of growing, and becoming a trend," said Kiran Kumar, a software engineer who attended the funeral, holding a handmade sign condemning hate crimes.

"If America does not fight this trend strongly, Indians will surely start feeling fear," he said. "Their families will fear of any news of any gunshot triggered by hatred. They are already just praying their own son or daughter does not become a target."

On Tuesday, as Kuchibhotla's body was carried to the cremation ground, dozens of regional camera crews followed, their anchormen staging on-air debates on whether Indian immigrants should return home.

India's minister of labor, Bandaru Dattatreya, attended, as did a major movie star in the Telugu language, and Chukka Ramaiah, a 91-year-old mathematics teacher who is celebrated for sending students to top-ranked Indian institutions and onward to the U.S.

"It is heartbreaking for any teacher to see a student die, at such an age, before having lived his fullest life," Ramaiah said. "How much has America lost, too, for this single act of hatred?"

After the ceremony, Dattatreya publicly recommended that Indian students speak only in English for the duration of their time in the U.S. as a safety measure.