Almost two years later, there are still crosses, flowers and weather-stained stuffed toys tied to a post at 43rd Street and Ashland Avenue — a memorial for a tragedy.It was here on March 6, 2015, that Elizabeth Peralta-Luna, 30, and her two children, Elizabeth,... 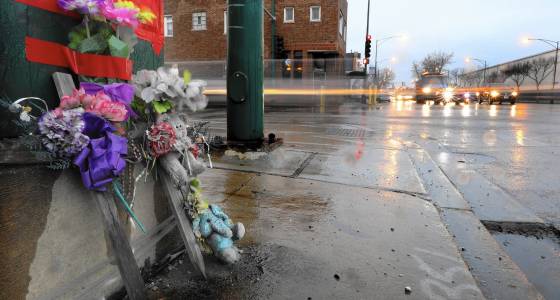 Almost two years later, there are still crosses, flowers and weather-stained stuffed toys tied to a post at 43rd Street and Ashland Avenue — a memorial for a tragedy.

It was here on March 6, 2015, that Elizabeth Peralta-Luna, 30, and her two children, Elizabeth, 9, and Dylan, 4, were struck and killed by a semi truck as they walked to a bus stop.

Ashland Avenue — a wide, four-lane arterial and one of Chicago's busiest streets — is also the deadliest for pedestrians, according to three years of police statistics obtained by the Tribune.

Chicago police data show that the worst Chicago streets between 2014 and 2016 in the city for pedestrians, bicyclists and motorists are major arterials — led by Lake Shore Drive with 15 deaths, Ashland with 14, Western Avenue with 14, Milwaukee Avenue with nine, and Stony Island and North avenues with eight each. The data do not include expressways, which are patrolled by state police.

A lawsuit was filed in the deaths of a woman and her two children who were killed Friday by a semi truck at Ashland Avenue and 43rd Street in Chicago's Back of the Yards neighborhood.

The suit, filed Monday in Cook County Circuit Court, named the driver of the truck, Zachary Barngrover, 23, of...

A lawsuit was filed in the deaths of a woman and her two children who were killed Friday by a semi truck at Ashland Avenue and 43rd Street in Chicago's Back of the Yards neighborhood.

The suit, filed Monday in Cook County Circuit Court, named the driver of the truck, Zachary Barngrover, 23, of...

Ashland saw the most pedestrian deaths at 10 — with all but one occurring on the South Side between 43rd and 87th streets. North Avenue was next, with seven pedestrians killed.

As traffic deaths rise nationally and locally, major arterials in the city and suburbs are a good place to examine why so many deaths happen and how they might be avoided, according to transportation experts.

"They are magnets for traffic crashes," said Ron Burke, executive director of the Active Transportation Alliance. "It goes to the nature of their design."

Highway wrecks often get more attention because of their horrific nature and the way they disrupt traffic, Burke noted. But nonhighway arterials see a disproportionate number of crashes in the region, he said.

Arterials are wider and busier than residential streets, and people tend to drive fast when they can, said Heather Schady, senior transportation planner for the Active Transportation Alliance. There are also many places to turn since they are often lined with businesses. These all create opportunities for accidents.

Wide streets pose a "double threat" to pedestrians, noted Luann Hamilton, deputy commissioner at the city's Department of Transportation. That means a car may stop to allow a pedestrian to cross, but a car approaching in another lane may not see the pedestrian and hit him, Hamilton said.

Arterial streets that run at a diagonal like Milwaukee and Archer avenues present another danger because they involve six-corner intersections, which make for unexpected points of conflict, Hamilton said.

South Ashland is an example of an arterial riddled with problems for pedestrians, bicyclists and motorists.

Drivers who want to go north and south quickly in neighborhoods like New City, West Englewood and Auburn Gresham and don't want to use the Dan Ryan Expressway prefer Ashland to other streets, according to residents.

That's because four-lane Western Avenue has eight red light cameras south of Madison Street, while Ashland has three. Halsted has seven red light cameras, while Damen has just a single lane in each direction.

"That's how people drive. They're always in a hurry," said Saul Zamora, 27, watching semis and cars fly by as he waited for the Ashland bus at 43rd. He works and lives in the area, and has been hit while riding his bike. Elizabeth Peralta-Luna had worked for his aunt.

Another possible issue is that the distance between traffic lights can be two full blocks, and pedestrians often jaywalk.

"We're almost encouraging jaywalking in some of these areas," said Jeffrey Kroll, a personal injury attorney who specializes in traffic incidents. "People aren't going to walk all the way to a light when they can cross between two cars."

Near balloons, stuffed animals and lit candles resting on melting black ice, friends of Elizabeth Peralta-Luna huddled in sorrow early Saturday evening, near where she and her two children were struck and killed by a semi-tractor trailer the day before.

Known as “Eli” to her friends, Peralta-Luna,...

Near balloons, stuffed animals and lit candles resting on melting black ice, friends of Elizabeth Peralta-Luna huddled in sorrow early Saturday evening, near where she and her two children were struck and killed by a semi-tractor trailer the day before.

Known as “Eli” to her friends, Peralta-Luna,...

Chris Taylor, 38,who works at Evans Funeral Home at 6451 S Ashland, sees how carelessly some people drive in the neighborhood. Standing on the sidewalk on a mild weekday afternoon recently, Taylor frowned as he watched cars either running the red light at Ashland and 65th Street or making illegal left turns.

A 7-year-old girl, Samyra Lee, was walking with her mother in the crosswalk across Ashland at 65th Street on May 27, 2016, when she was killed by a city tractor.

"There are accidents because people aren't paying attention," Taylor said. "They're doing this," he added, looking down at his mobile phone. He called both fatal crashes and murders in the city "senseless."

Some of the traffic problems on arterials like Ashland are tied to depopulation in parts of the city, Hamilton noted. Some streets were designed for an earlier time, when there were more stores, more traffic and more people. When an arterial is lined with empty lots and abandoned buildings, people drive faster, Hamilton said.

"It adds to that flat landscape that makes people think they can go 50 mph," Hamilton said.

Being poor can also mean you're more likely to die in a traffic crash. The city's Transportation Department reported this month that people experiencing medium and high levels of economic hardship make up 82 percent of the city's traffic deaths.

The city is working on its "Vision Zero" plan, a blueprint for eliminating traffic deaths and serious injuries for motorists, pedestrians and cyclists. "Vision Zero" is an idea that began in Sweden and has been rolled out in other cities. Working with multiple agencies including police, transportation and public health, Chicago hopes to release its plan in the first quarter.

There also has been an increase nationally in pedestrian deaths, up 9.5 percent in 2015 compared with 2014, the highest number since 1996, while overall traffic deaths rose by 7.2 percent, according to the latest numbers available from the National Highway Traffic Safety Administration. More cars on the road because of low gas prices and an improved economy have contributed to the rise in total fatalities, along with the ongoing problem of speeding and drunken and distracted driving, according to the National Safety Council.

One is to install refuge "islands" in the middle of crossings so pedestrians can stop and wait midblock if the light changes, and traffic bump-outs. The latter means extending concrete into the intersection to reduce the space needed to cross and get cars to slow down, Hamilton said. Such measures have been added during resurfacing in crash-prone areas, she said.

"It makes pedestrians more visible and gives them a place to stop," Schady said.

Countdown lights help pedestrians see how long they have to make it across. Traffic lights can also include a delay before the light turns green so pedestrians can clear the intersection before traffic moves again, Schady said.

A way to calm traffic on Ashland in particular could be a rapid transit bus system between Irving Park Road and 95th Street. Burke said this would cut average car speed by only about 1 mph but reduce top speeds "quite a bit." The idea, proposed by the CTA and the Transportation Department in 2013, faced opposition from residents and businesses and is stuck in the planning phase.

"It can't be a slap on the wrist," he said. Currently, the maximum state fine for distracted driving is $150 for more than one offense, compared with thousands of dollars for driving drunk.

But Hamilton said that cities have to careful not to impose too many punitive financial penalties in low-income areas.

Taylor said he does not think it's the city's problem to make streets like Ashland Avenue safer, but that of individuals using the street.

"Whether I'm driving or walking, I have a responsibility to pay attention to what's going on," Taylor said.