As tipping falls out of favor, search is on for alternative

Saru Jayaraman, director of the Food Labor Research Center at the University of California, Berkeley, advocates abolishing restaurant tipping in favor of the $15-an-hour minimum wage, as the best way to economically uplift the working poor in an exploitative... 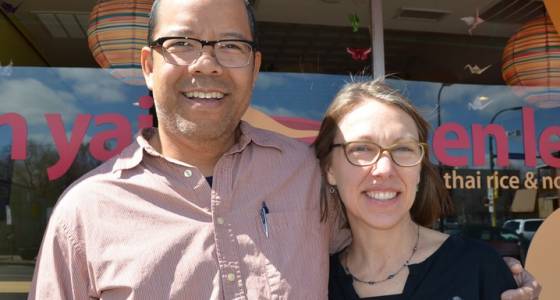 Saru Jayaraman, director of the Food Labor Research Center at the University of California, Berkeley, advocates abolishing restaurant tipping in favor of the $15-an-hour minimum wage, as the best way to economically uplift the working poor in an exploitative industry.

She spoke last week to about 200 labor activists, students, restaurant owners and others at the University of Minnesota business school. She said that tipping is rooted in a time when women and minorities were not entitled to fair wages and relied on the gratitude of customers.

“Employers should pay workers, not customers,” said Jayaraman, a Yale Law graduate who worked in restaurants as a student and gained renown for a 2014 book, “Behind the Kitchen Door.” “Restaurant industry workers reject this feudal system.”

Holly Hatch-Surisook, a Northeast restaurant owner agrees, but doesn’t like the “sledgehammer” approach. And she can’t afford $15 an hour yet.

Hatch-Surisook is co-owner with her husband, Joe, of the Sen Yai Sen Lek Thai restaurant. They mortgaged their nearby house to open the restaurant in 2008. Hatch-Surisook quit a job as an academic adviser at the U to be an entrepreneur on resurgent Central Avenue NE.

“Making employees rely on tips for fair wages should be changed, but I also feel strongly that we must — at the same time — address the vast pay inequities that a tipping system creates between those who carefully prepare the food we eat, and those who serve it,” Hatch-Surisook said. “All staff should be compensated fairly for their work, and a tipping system takes away an employer’s ability to structure pay equitably.”

The Hatch-Surisooks are business and community builders. Their kids go to local public schools.

The business pays all but servers, who make $9.50 minimum wage plus tips, at least $10.50 an hour starting wage.

There is so little turnover among the staff, that Hatch-Surisook just hired her first worker in two years.

“We hire you at $10.50 and I will pay you for as many sick days as [you] need,” she said. “Everyone who works for us works hard. Yet someone with fantastic cooking skills and years of service may never get to make what a 21-year-old part-time server will who gets a lot of tips.”

The drive for $15 an hour, which likely would be phased in over several years, has stimulated a good discussion about fairness and economic competitive between Minneapolis and St. Paul, which are considering their own minimum wages, and the restaurant industry association.

The best restaurateurs are paying more in a good, employee-hungry economy and encouraging servers to share tips. Several, including three I wrote about recently, plan in coming months to abandon tipping in favor of higher wages of up to $12.40 an hour and price increases. .

“The resulting higher prices do present a challenge,” he said. “Our patrons seem to accept moderately higher prices in order to pay a living wage for staff, which we have done at our co-op grocery stores for 10 years.” The beginning wages ranges from about $10.28 to $11.57.

Customers who want to leave something in appreciation of good service goes in a jar that amounted to $6,000 for local nonprofits last year.

Other restaurateurs who are abandoning tipping will put out a jar for donations that will be shared with all employees.

The restaurant-food service industry is the single biggest employer of near-minimum-wage workers, with 3.75 million people, or about 18 percent of workers, followed by grocery stores with fewer than 1 million, according to the Pew Research Center.

Moreover, today’s minimum wage doesn’t buy what it did 40 years ago, thanks to purchasing-power erosion caused by inflation.

Neal St. Anthony has been a Star Tribune business columnist and reporter since 1984. He can be contacted at nstanthony@startribune.com.