WASHINGTON -- There was candidate Donald Trump in Colorado, waving a rainbow flag emblazoned with a "LGBTs for Trump," a photo opportunity meant to signal he was a new brand of Republican when it comes to protecting LGBT Americans.Four months later, faced... 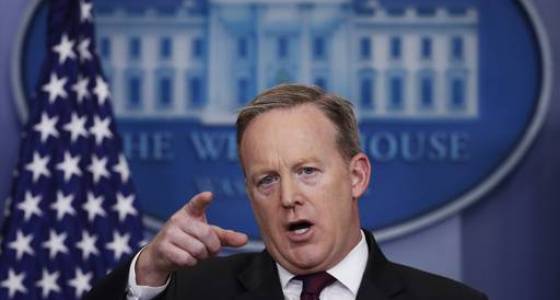 WASHINGTON -- There was candidate Donald Trump in Colorado, waving a rainbow flag emblazoned with a "LGBTs for Trump," a photo opportunity meant to signal he was a new brand of Republican when it comes to protecting LGBT Americans.

Four months later, faced with a major decision point on the issue, Trump's White House held up another slogan: defense of states' rights.

The administration's decision this week to revoke guidance on transgender students' use of public school bathrooms was an early test of Trump's loyalties - between the gay and lesbian community he said he supports but largely did not support him, and the social conservatives who helped drive his victory. It's a tension Trump could find difficult to manage throughout his presidency, when the hot-button social issues he worked hard to avoid during the campaign are impossible to ignore.

"In a weird way and sometimes a clumsy way, I think President Donald Trump is trying his best to balance issues of LGBT equality and the constituency of evangelical Christians that helped propel him to the White House," said Gregory T. Angelo, president of the Log Cabin Republicans, which represents LGBT conservatives. "On LGBT issues in less than a month, we have seen the president go into two separate directions."

Late in January, the White House released a statement declaring Trump would enforce an Obama administration order barring workplace discrimination on the basis of sexual identity. The unusual announcement of a decision not to act - essentially affirming the status quo - followed an internal debate over revoking the order. Trump sided with LGBT activists at the urging of his daughter Ivanka Trump and her husband, White House adviser Jared Kushner, both of whom are viewed as moderating influences on the president.

This week, Ivanka Trump and Kushner were publicly silent on the transgender bathroom debate.

The restroom decision set off tensions within the administration. Education Secretary Betsy DeVos expressed reluctance to rescind protections for transgender students and clashed with Attorney General Jeff Sessions, who supported it, according to a person familiar with the conversations but not authorized to speak publicly about internal discussions and so requested anonymity.

After Wednesday's announcement, DeVos released her own statement, stressing that the administration had a "moral obligation" to protect LGBT students, which she said was "not only a key priority for the department, but for every school in America." Speaking Thursday to the Conservative Political Action Conference, she framed it as a legal matter, "a very huge example of the Obama administration's overreach."

The administration painted the decision as a states' rights issue.

"We are a states' rights party," said White House spokesman Sean Spicer. He also confirmed that the timing took into account a filing deadline for a Supreme Court case on transgender rights.

As for Trump, he said, the president "has a big heart" when it comes to transgender children but is not going to tell schools what to do.

Deferring to the states on the restroom issue could satisfy some of Trump's core supporters while costing him very few votes, some Trump allies say.

"Trump understands he would never have won without the strength of the evangelical vote," said Ralph Reed, chairman of the Faith & Freedom Coalition, who added the policy would energize Trump's religious base.

"Those who favor liberal social policy are not likely to vote for Trump in any case," Reed said. "The voters in the middle won't cast their ballots based on abortion or transgender issues---they will vote on jobs, the economy and national security."

Roughly 9 million Americans identify as LGBT, according to a study by The Williams Institute at UCLA School of Law. That number includes 150,000 transgender people ages 13 to 17.

White House spokeswoman Kelly Love said the administration did not have any more actions or executive orders on LGBT issues planned, but gay rights advocates says they are worried about other policies that may come from the White House or Congress.

During the campaign, Trump - who supported HIV charities and began allowing openly gay people at his clubs decades ago - said at an NBC town hall that he would permit transgender icon Caitlyn Jenner to use any bathroom she wanted. He said, "People go, they use the bathrooms that they feel is appropriate."

He quickly backed off that statement, telling Fox News' Sean Hannity: "I think that local communities and states should make the decision ... The federal government should not be involved."

But Jenner aimed a video tweet late Thursday at the president, holding him accountable for his campaign promise: "Well @realDonaldTrump, from one Republican to another, this is a disaster. You made a promise to protect the LGBTQ community. Call me."

The Trump administration directive has no immediate impact because a federal judge in Texas temporarily blocked the Obama guidance in August. But in adjusting his own position, Trump was moving toward more than his party. Polls suggest a slim majority of Americans are squeamish about allowing transgender public school students to use the bathroom that corresponds to the gender on their birth certificates. In one, a July 2016 poll by Quinnipiac University, people were asked specifically about the situation in public schools. Americans said by a 56 percent to 36 percent margin that schools should not be required to allow transgender students to use bathrooms and locker rooms consistent with their gender identity.