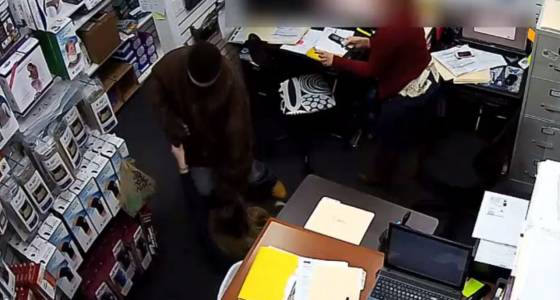 When one of the employees refused, the crook threw her to the floor, punched and kicked her, and hit her twice on the head with his gun, causing a cut, police said.

The victim fought back by grabbing and kicking her attacker, the video shows.

The second employee, said to be 44 years old, forked over $80 in cash. The video shows the thief talking to her as he counts the bills. He briefly pulled her out into the hallway before taking off.

The younger employee was taken to Brookdale Hospital, where she was treated and released.

The thief is between 40 and 50 years old, about 5-foot-11 and 160 pounds. He was last seen wearing beige work boots, blue jeans, a brown jacket and a brown skull cap with a light brown stripe, cops said.