Ariana Grande proves why she won best artist: Highlights from her Dangerous Woman Tour at The Q (photos, video)

CLEVELAND, Ohio -- Ariana Grande proved why she earned Artist of the Year during her Dangerous Woman Tour performance at Quicken Loans Arena on Sunday night. Grande won the American Music Award's top award in November, and some questioned why. But the... 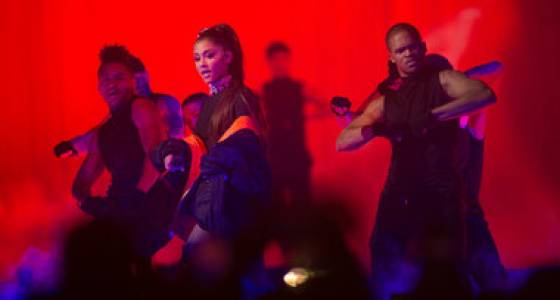 CLEVELAND, Ohio -- Ariana Grande proved why she earned Artist of the Year during her Dangerous Woman Tour performance at Quicken Loans Arena on Sunday night.

Grande won the American Music Award's top award in November, and some questioned why. But the answer is simple, she has an incredible voice and is an excellent entertainer.

Her show at The Q was filled with her soaring vocals, five costume changes and numerous special effects. Her opening acts were also a plus, making this concert even more worthwhile.

Check out the video below for a recap of the show.

Here are some highlights from the Dangerous Woman Tour in Cleveland:

1. Little Mix, the four-member group that won the eighth season of the UK's "The X Factor," was fabulous. Maybe it's because they're a British girl band, but Little Mix has a bit of a Spice Girls vibe going on. They're entertaining and high energy. Little Mix's catchy breakup anthem, "Shout Out to My Ex," was a crowd favorite.

2. Grande is as talented as she is stunning, and her costumes were flawless. She doesn't show a ton of skin. Her first costume was a little black dress with a sparkly choker and thigh-high boots. In total, she changed five times. She also somehow managed to dance around the stage in killer stilettos. Of course her hair was in its signature long ponytail.

3. One of the coolest aspects of the Dangerous Woman Tour was the stage. The curtain/screen behind Grade made her performance even more visually appealing. There was the typical concert theatrics as well, including risers, pyrotechnics, confetti and balloons.

4. Grande has a great voice. Whether you like her music or not, you can't deny she has talent. A friend described Grande's sound perfectly, saying Grande sounds like a less squeaky Mariah Carey.

5. "Side to Side" and "Dangerous Woman" were the best songs. During "Side to Side," Grande appeared on stage on workout bikes. While on a riser, Grande and several backup dancers pretended to bike. For Nicki Minaj's parts, the rapper was shown on the big screen. She closed the show with "Dangerous Woman" and it was the perfect ending to a solid concert.