Another Jewish cemetery vandalized and again Muslims reach out to help

Less than a week ago, Tarek El-Messidi, a Muslim activist, helped organize a fundraiser to help with the cleanup of a desecrated Jewish cemetery near St. Louis. It raised more than $130,000, garnering widespread media attention and tweets from celebrities... 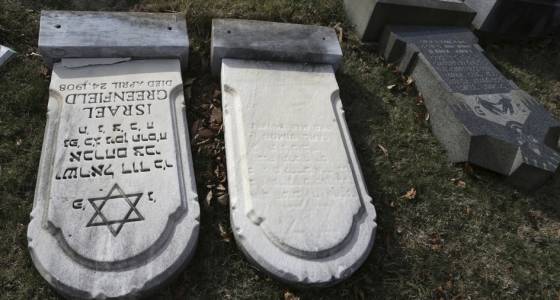 Less than a week ago, Tarek El-Messidi, a Muslim activist, helped organize a fundraiser to help with the cleanup of a desecrated Jewish cemetery near St. Louis. It raised more than $130,000, garnering widespread media attention and tweets from celebrities including Ellen DeGeneres and J.K. Rowling.

Because it brought in considerably more than expected, El-Messidi vowed to use the remaining money strictly when needed to counter anti-Semitism.

He hoped he wouldn't have to dip back in so soon.

But on Sunday night, El-Messidi read the news of yet another vandalized Jewish cemetery. This time it hit closer to home, just miles from where he lives in Philadelphia.

So El-Messidi immediately went to the cemetery to see how he could help.

There he found a team of diverse people, including many local Muslims, at work doing their best to erect what he said were several hundred toppled headstones at Mount Carmel Cemetery in a neighborhood in the northeast part of the city. Police have said they counted about 100 overturned.

"Seeing this in person was very devastating," El-Messidi said in a Facebook post. "Many people there were embracing one another in tears due to what they saw. I want to ask all Muslims to reach out to your Jewish brothers and sisters and stand together against this bigotry."

A local rabbi, Yosef Goldman, who also was at the cemetery, wrote on his Facebook page: "We're turning upright the stones that are light enough for us to do so. And I'm feeling that the faith community in the US is strong. A caretaker for a nearby Quaker cemetery has been here for hours, and Muslim and Christian friends and colleagues are reaching out. Acts of violence against Muslim and Jews will only make us stronger and bring us together. sacredresistance lovetrumpshate"

In the rise of hate speech and crimes over the past year, Muslim and Jewish communities have been targeted. The Southern Poverty Law Center, which tracks hate crimes, reported that the number of anti-Muslim hate groups rose from 34 in 2015 to 101 last year.

These events, including a rash of bomb threats to Jewish community centers nationwide, has "stoked fears" among American Jews, said Nancy Baron-Baer, the Philadelphia director of the Anti-Defamation League. "We welcome friendship from all parts of the community, she said, adding, that she hopes the relationships borne out of these difficult times will continue during good times, too.

Efforts are underway for a community cleanup day at the cemetery this week, she said. A joint news conference also is planned for Monday afternoon with Philadelphia religious leaders across denominations to condemn the incident in a public show of solidarity.