CLEVELAND, Ohio -- Eloise McGarry (Anna Kendrick, the "Twlight" movies) joyfully looked forward to her best friend's wedding, where Eloise and her boyfriend Teddy were to be maid of honor and best man. But that was before Teddy (Wyatt Russell) dumped Eloise... 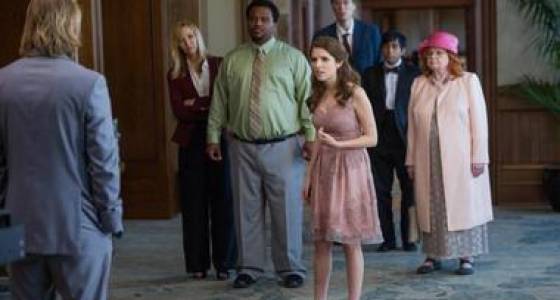 CLEVELAND, Ohio -- Eloise McGarry (Anna Kendrick, the "Twlight" movies) joyfully looked forward to her best friend's wedding, where Eloise and her boyfriend Teddy were to be maid of honor and best man.

But that was before Teddy (Wyatt Russell) dumped Eloise via a callous text message.

When the wedding day comes, in the comedy "Table 19," Eloise has lost her position as maid of honor. She's relegated to Table 19, a table positioned at the back of the hall and filled with a motley group of guests the bride hoped wouldn't show up.

The spin into grim is just as well, because the comedy wasn't working. The jokes are thin, and scenes fade away without any point.

Kendrick, who was the voice of Princess Poppy in "Trolls," tries to put slapsticky energy into "Table 19," but she can't overcome the script's problems. It feels as if the audience is also stuck at a boring, endless wedding reception.

"Table 19" wastes a promising premise and a talented cast that includes comedy veterans Robinson, Kudrow and Merchant. Robinson was memorable on television's "The Office," and comedy movies such as "Pineapple Express" and "Hot Tub Time Machine."

Kudrow will always be Phoebe from "Friends," but recently she appeared in the movie "The Girl on the Train." Merchant is a stand-up comedian known for his collaborations with Ricky Gervais on the British version of "The Office."

Squibb has some enjoyable bits as a dotty former nanny. Another bright spot is Revolori's kind but clueless teenager decked out in his dad's furry bow tie.

By the time that the last of the champagne has been drunk, the guests at Table 19 have discovered that while they're not perfect, they deserve love. The movie ends on a sweetly romantic note, proving that love can bloom even when comedy dies.