President Trump started a new phase of his presidency Tuesday night with a new tone: upbeat, if only by Trump standards, and just perhaps hunting to make a few offers. But the optimism in the speech was tempered, and of a particular sort –- centered on... 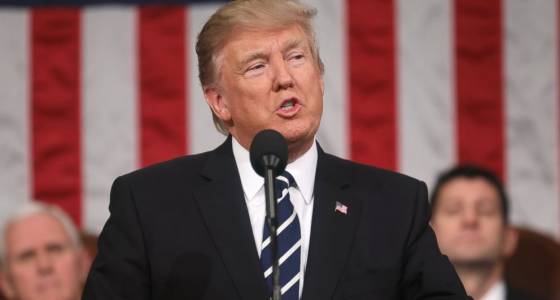 President Trump started a new phase of his presidency Tuesday night with a new tone: upbeat, if only by Trump standards, and just perhaps hunting to make a few offers.

But the optimism in the speech was tempered, and of a particular sort –- centered on the president who was the center of attention. Trump continued to depict a nation with a shrinking middle class, a listless foreign policy, saddled by debt, and with drugs pouring more than the borders, criminal cartels and immigrants committing murders, and a crumbling technique of roads and bridges.

Enter, in Trump's telling, Trump: "In 2016, the earth shifted beneath our feet."

For a evening, his difficult edges had soft tones. From a man criticized for often failing to condemn racism and anti-Semitism amongst his supporters, he supplied a condemnation of "hate and evil in all its forms."

From a man promising a "deportation force" and decrying undocumented immigrants as killers and racists, he offered a potentially startling shift with a call for "genuine and constructive immigration reform."

From a man who seemed to blame the death of a Navy SEAL on those who created the raid, he supplied a raw and emotional tribute to a legacy "etched into eternity."

From a man who has applied his Twitter feed as an insult generator –- even just after getting elected president –- came an uncommon declaration.

"The time for trivial fights is behind us," the president mentioned. "From now on, America will be empowered by our aspirations, not burdened by our fears."

In that message are shades of the economic nationalism that got Trump elected –- and that he views as key to his policy successes from right here.

"Americans should place its personal citizens very first, for the reason that only then can we genuinely Make America Good Again," he mentioned.

It's not the slogan that will result in quarrels, at least not by itself. It is the policies that Trump is propagating –- policies that have evolved only minimally from his scorched-earth campaign.

He offered no give in his plans for a border wall, immigration crackdown, renegotiated trade offers, and tax cuts. Of course, he drew significant applause from only half the room with his call to “repeal and replace Obamacare” – without the need of giving the fresh particulars of his strategy that are now bedeviling his personal party.

“Obamacare is collapsing -- and we have to act decisively to protect all Americans. Action is not a decision -- it is a necessity," he mentioned. "Why not join forces to finally get the job completed, and get it completed right?"

Democrats will have a lot of answers to that query. The president’s couple of enticements for his opponents -– his vision of uniting on paid loved ones leave, clean air and clean water, and infrastructure investments – are likely to be stifled by the information of his actions, not his words.

Still, the president's tone was striking.

"Anything that is broken in our nation can be fixed. Each and every problem can be solved. And just about every hurting family can discover healing, and hope," he mentioned.

Regardless of whether this aspect of the shift marks a genuine pivot from an unpredictable president, or head fakes from a political figure who's produced his name through distractions, remains to be noticed. Possibly this is a president becoming presidential, or a businessman returning to his deal-producing roots, or a political shape-shifter displaying a new skin that won't final until daybreak.

At bottom, having said that, this appears like new marketing and advertising around a familiar -– and nevertheless generally extreme – agenda. If there's optimism in America, it is still confined to a base that is channeled its hopes and expectations into a still-untested president.