All the best looks from the Oscars 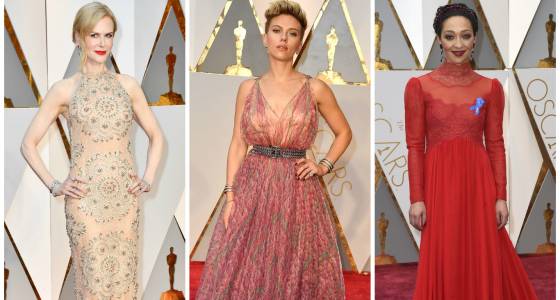 All that glittered at Oscars was gold. And bronze and silver. Even the black and white shimmered.

The red carpet was awash in enough metallic thread, beading, crystals and sequins to make even the most neutral shades shine.

And they needed to because, unlike other awards shows this season, modesty ruled the Oscars red carpet. The reigning look of the night was the high-necked, long-sleeved gown, played one of two ways: trendy Victorian or skin-tight vampy. The runner-up? Subtle nods to the naked dress — from skin-colored, embroidered columns such as Nicole Kidman’s to a peep-a-boo lace peignoir gown on Salma Hayek.

Old School Hollywood also made an appearance in velvet, made modern with dangerous curves and sharp cutaways. Color was in short supply, unless it was red, which made the few who wore it more than style standouts.