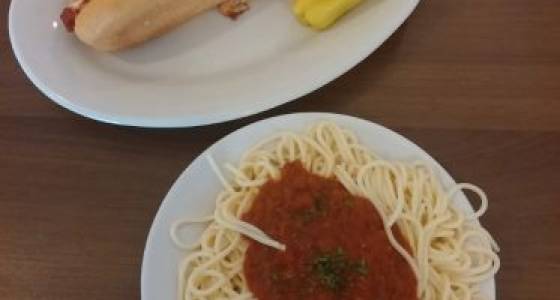 BRANDON — Farhan El Fayez knows about some of the past tenants who have tried recently to run successful businesses out of the same location of his new restaurant.

Frank, as he goes by, opened Alfredo's Italian Cuisine a month ago at 905 E Brandon Boulevard, revamping what was The Lion XTreme Gaming.

It was also Julio's Gourmet Bistro in 2014, the Neighborhood Bistro in 2011 and Phu Faa Thai in 2008. The address is part of the same building that houses Bubbaque's, but it is situated farther back off State Road 60 partially obscured by rows of trees.

"I'm trying to do everything in my power to bring people here," said Fayez, who paid to have some of the trees trimmed after signing a three-year lease.

Fayez also is offering diners a unique twist to Italian fare. The native of Jordan, who relies on the help of his family to operate Alfredo's, says he adds three Arabic spices to his homemade sauces.

"It makes a big difference," said Fayez, who has lived in Brandon the past two years after growing to like the area while visiting a friend.

He established Alfredo's in 1988 in South Carolina under the tutelage of the namesake who started the Capri's Italian Restaurant chain. He has catered for more than 700 people and invites small or large private party requests.

Alfredo's, which Fayez says is a name that he thought up because it sounded good, is a quaint eatery with 14 tables and a couple flat screen televisions. The lunch menu features sandwiches starting at $5.95 and the pasta dinner entrees range from $6.95 to $11.95.

Fayez said he is glad to finally be open and share his homemade recipes with the greater Brandon area, since it took him more than 7 -1/2 months, multiple trips downtown for permitting and a bevy of inspections on everything from the cooking equipment to the air conditioning.

"Something has to be done about (the permitting process)," said Fayez, "It's killing business."

For now, Fayez hopes his efforts of networking with nearby Nativity Catholic Church parishioners, offering his food via the Mobile Meals delivery service and making his sign more visible to passersby will entice patrons to a spot that has been somewhat overlooked in the past.

"Any questions or comments, let us know," he said.

Nail Holics Spa has re-opened under new management in Riverview. Ben and Anna Tran remodeled and redecorated the shop into a relaxing spa.