Alec Baldwin may have said he won't be impersonating President Donald Trump for much longer, but the actor returned to "Saturday Night Live" this week to play the commander in chief.The episode kicked off with a sketch that looked to the future.... 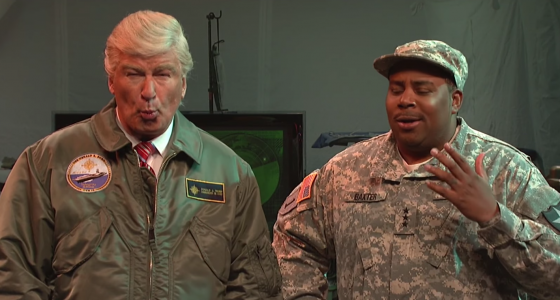 Alec Baldwin may have said he won't be impersonating President Donald Trump for much longer, but the actor returned to "Saturday Night Live" this week to play the commander in chief.

The episode kicked off with a sketch that looked to the future. The year is 2018, aliens have invaded Earth and embattled U.S. soldiers look to the president for inspiration - you know, the typical big action-flick premise.

"We've lost limbs, we've lost lives, but we will not lose the United States of America," says the general, played by Kenan Thompson. "But first, your commander in chief wants to say a word."

In rolls Trump, played by Baldwin, pouty face and all. But he keeps getting off track as he tries to rev up the troops and offer a strategy to fight back.

Then he lays it out: "Here's the deal: We are going to beat these aliens because we have got the best military, but we don't win anymore. And the aliens are laughing at us. They're killing us, and they're laughing at us."

"We know the aliens are killing us, sir," the general says. "They have the most advanced weaponized technology we have ever seen. What should we do?"

"The aliens are laughing at us and they're killing us. Mr. President! We have to do something!"

The state of California has been vaporized, the general says. "So then I won the popular vote?" Baldwin-as-Trump responds.

The general adds that this "highly advanced" alien species is from the planet Zorblat-9, but Trump signals skepticism about that, adding, "I've actually heard Zorblat-9 is very beautiful, very fantastic."

A horrified soldier chimes in: "Oh my God. Does he have business ties on Zorblat-9?"

Throughout the sketch, the general tries to impress upon the president the dire situation the country is in; most of the land is controlled by aliens, while just a small portion still remains under American control.

But Baldwin-as-Trump talks about how NBC has been "very unfair to me," and he bungles sentences, such the reciting Pledge of Allegiance.

In the sketch, Trump also puts forward a theory - not from FBI or CIA intelligence, but one he heard from Alex Jones of Infowars ("You know he's legit because he's always taking off his shirt, OK?" Trump says in the sketch).

"I actually heard the aliens are already here. They have been hiding in this country for hundreds of years," Baldwin-as-Trump says. "It's a fact. They're shape-shifters. They look like regular people, but they're aliens. Look, there's one right there," he says, pointing out black soldiers.

Finally, green aliens arrive: "Humans! Resistance is futile. Take me to your leader."

Trump pauses, then points to the general. "It's him. He's the president."
Later on Saturday's episode, Baldwin showed up as Trump for a brief moment during a prerecorded short about Ivanka Trump.

It's unclear how much longer Baldwin will continue the presidential impersonation. "The maliciousness of this White House has people very worried, which is why I'm not going to do it much longer by the way, the impersonation," Baldwin told "Extra" last week. "I don't know how much more people can take it, you know."

Chance the Rapper performs on final 'SNL' episode of 2016