Thousands packed Santander Arena in Reading Sunday to remember retail giant Albert Boscov, whom many described as a caring philanthropist, loyal friend and family man, according to reports. Boscov, 87, died Feb. 10 after a brief battle with pancreatic... 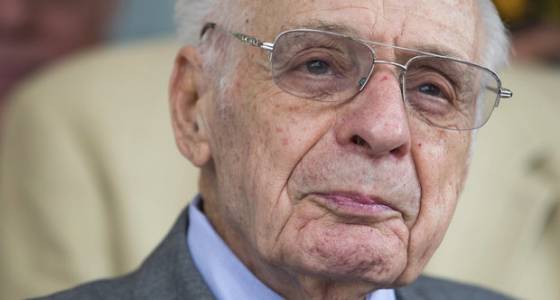 Thousands packed Santander Arena in Reading Sunday to remember retail giant Albert Boscov, whom many described as a caring philanthropist, loyal friend and family man, according to reports.

Boscov, 87, died Feb. 10 after a brief battle with pancreatic cancer. Surrounded by his wife Eunice and their three daughters, he passed away at home in Reading, where his father founded the business in 1914.

The two-hour public memorial drew a large crowd made up of family members, friends, business people, employees, vendors, buyers and patrons. Guests were seated to music and a slideshow, according to the memorial's program.

Some in attendance had never met the man several called not only a giant in the industry, but also the community, pennlive.com reported.

About a dozen speakers, including Bob Brock, a lifelong friend and several of Albert's family members, remembered Boscov with stories, music and videos. Former Gov. Ed Rendell, former Gov. Tom Corbett and Sen. Bob Casey also were in attendance, according to reports.

Tom McMahon former mayor of Reading stated that at 5 feet, 7 inches, Boscov was not a man of big stature, but he was a real-life superhero, according to the pennlive.com report.

The Eric Mintel Quartet, Gerald Veasley and Carol Reddick presented a musical performance of "The Impossible Dream," according to the program.

Jim Boscov, Albert's nephew and now CEO of the family-owned company, recalled in reports how his uncle propelled a family operation to one of the biggest region-wide franchises.

"Albert taught of us it's all about relationships. Everybody wins," Jim Boscov stated in the pennlive.com report.

Albert Boscov took over the company from his father in 1950 and became known for his attention to detail and involvement in every facet of the company. After a long and successful career, he rescued the business when he came out of retirement in 2008 to buy it back amid bankruptcy.

Boscov's employs about 7,500 people and has 25 stores in Pennsylvania and 25 others spread across New Jersey, Maryland, Delaware, New York, Connecticut and Ohio, according to its website. Locally, it has stores at the Palmer Park Mall in Palmer Township and the Lehigh Valley Mall in Whitehall.

Corbett shared a light-hearted memory in the pennlive.com report about Albert: "He's the only man that ever called me honey...He had a great heart, great compassion for the people of Pennsylvania especially this region.  There isn't anyway I would miss this."

The memorial wrapped up with a video of Boscov, leaving one of his stores, singing "Zip-A-Dee-Doo-Dah," reports said. The family also played a slide of personal thanks set to a song by Louis Armstrong, according to the program.