Ahead of CU Boulder visit, Robert Gates says country is 'exhausted with war'

If you goWhat: Robert Gates at CU BoulderWhen: 7:30 p.m. Tuesday Where: Macky Auditorium, 1595 Pleasant St.Tickets: The event is sold out, according to the university.More info: Visit http://bit.ly/2mqqv15 to learn more. At a time when American politics are... 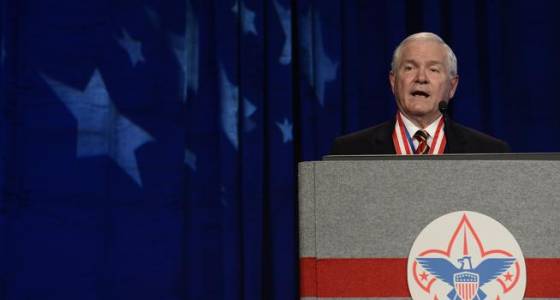 What: Robert Gates at CU Boulder

Tickets: The event is sold out, according to the university.

At a time when American politics are as polarized as ever, Boulder will be treated to a visit from an increasingly rare breed: a statesman trusted by Republicans and Democrats alike.

Dr. Robert Gates, the former Secretary of Defense of the United States — among many other key positions — will speak at the University of Colorado on Tuesday evening, and will remain in town on Wednesday to spend time in classrooms.

His speech, which is sold out, will be the first in a newly launched series on leadership.

Gates isn't involved in politics anymore, but he made headlines recently for a ringing endorsement of Donald Trump's defense secretary, James Mattis.

In an interview ahead of his appearance, Gates, 73, discussed his career in public service and what he thinks is next for American military policy.

How confident should the public be that there are safeguards, through the CIA and the secretaries of defense and state, to limit a planned or spontaneous act of war by the president and his advisers?

The president, in foreign affairs, has a great deal more independence and authority than, for example, in domestic affairs, where there are both legal and political constraints on bringing change. One of the characteristics that I have noticed about the presidents is their willingness to surround themselves with strong people who are independent-minded and will tell the president exactly what they think, but the president is the decision maker.

What's the most memorable point of your career in which a president did not take your advice?

I recommended (to Obama) against military intervention in Libya. We've never had that explicit a conversation about it, but I think his actions and comments since that time would suggest that he thought I was right.

Have you spoken to President Trump at all recently? If so, how'd it go?

I haven't had any conversations with him since I met with him in New York on Dec. 1. Considering what I had written about him in the Wall Street Journal in September, he was actually quite gracious. It was a serious, thoughtful meeting. He asked for my recommendation (for defense secretary) if the slate was completely blank.

"Gracious" is a word many would not associate with the president. Was the Trump you met with different from the one we see on television?

All I can say is that in the meeting that we had he was serious and asking good questions. I felt like it was a very business-like meeting.

Trump regularly says the country's military is "depleted." Do you agree?

The military, we spend a lot, for sure. But the fact is our military has been at war for 15 years with a volunteer force that is, to a considerable extent, exhausted. Stock of supplies have been depleted, run down. Maintenance has been deferred and delayed in all the services on critical equipment.

A significant portion of marine aircraft cannot fly, a lot of Navy ships are overdue for maintenance. So, we have not had either the time to begin recovering from 15 years of war nor have the services had the resources to begin to recover.

Do you expect Donald Trump to engage the U.S. in new military conflicts?

I think to say that we will or won't have a military conflict is just an exercise in futility, because you don't know what's going to transpire in the international environment. One thing that's pretty clear is that the country is pretty exhausted with war. I think that this new president understands that.