Over the final 100 meters of Sunday’s classic team sprint, Jessie Diggins charged as hard as she could. The cross-country skier from Afton was gaining on Sweden’s Stina Nilsson, with a bronze medal at the Nordic world ski championships hanging... 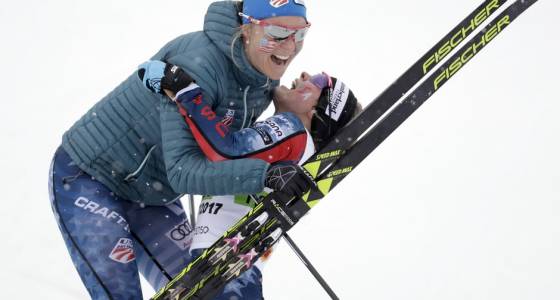 Over the final 100 meters of Sunday’s classic team sprint, Jessie Diggins charged as hard as she could. The cross-country skier from Afton was gaining on Sweden’s Stina Nilsson, with a bronze medal at the Nordic world ski championships hanging in the balance.

“I just double-poled like my life depended on it,” Diggins said. “I threw my foot out at the last minute for the lane. And then, all I was thinking was that Sadie has to hold me up, because I’m going to die.”

Teammate Sadie Bjornsen caught Diggins as she collapsed at the finish, beating out Nilsson by 0.19 of a second for an historic bronze medal at the meet in Lahti, Finland. Diggins and Bjornsen became the first Americans ever to earn a medal in a classic technique race at the world championships. Their medal was the third for the U.S. at the 12-day meet, the most ever won by American skiers at a Nordic world championships, and it was the fourth of Diggins’ career, the most of any U.S. cross-country skier in history.

“Going into the final, I was really nervous,” said Diggins, who took silver in Thursday’s freestyle sprint. “But I knew those nerves were there because we had a chance to do something huge.

“Sadie caught me [at the end], and that was such a cool moment. It didn’t sink in for a bit that we had done it. Then it just slowly dawned on me: We got a medal in a classic team sprint, and that is so cool. We’ve been working towards it for a long time.”

Diggins dropped out of Saturday’s skiathlon when she fell out of contention, choosing to conserve her energy for the team sprint. She excels in freestyle events, but she has worked hard to develop her classic skills.

Bjornsen, of Winthrop, Wash., is one of the U.S.’s top skiers in the classic technique. Sunday, she led off confidently, while Diggins skied conservatively through a chaotic first lap of the final. When the pace quickened in the second lap, Bjornsen stuck with the leaders.

She was exhausted as she tackled the hill on the last lap, but she entered the stadium with the lead group and left Diggins in strong position at the final handoff. After Nilsson got some separation on Diggins at the top of the hill, Diggins powered through the downhill section and got a good line for the final 100 meters.

“Then, I just double-poled my heart out,” she said. “In my head, I kept thinking, ‘You can! You can! You can, because Sadie needs you!’ That team belief brings out the best in my performance every time.

“We’ve been targeting this race for a long time, thinking about it and planning and visualizing it. I’m just so proud of this team.”