Here's what you may have missed, and what you need to know as you start winding down:President Donald Trump warned today that the nation's health care system was in danger of imploding and said Congress must make fundamental changes to the sweeping health... 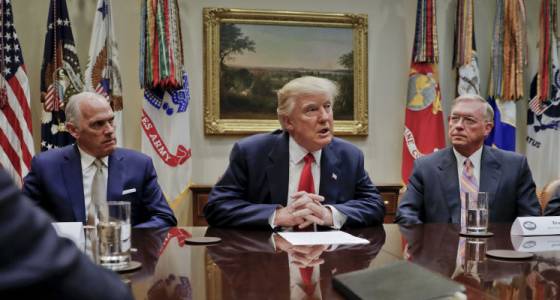 Here's what you may have missed, and what you need to know as you start winding down:

President Donald Trump warned today that the nation's health care system was in danger of imploding and said Congress must make fundamental changes to the sweeping health law passed by his predecessor. Trump said at a White House meeting with dozens of governors that he hoped to overhaul the American tax system but that was a "tiny little ant" compared to what he would need to do to remake the so-called Obamacare law.

Defense attorneys for Curtis Reeves continued their impeachment of the investigation leading to Reeves' arrest in 2014 after he shot another man inside a movie theater, calling into question the thought processes of the crime scene detective after the shooting. Prosecutors raised repeated objections to the defense questions, arguing what led to Reeves' arrest wasn't relevant to the judge. Stay with tampabay.com for live coverage from the courtroom.

Former President George W. Bush rarely weighs in on current political events, but today he offered some of his most pointed critiques of President Donald Trump's statements and policies in an interview with NBC's Today show. Asked about Trump's claim that the media is the "enemy of the people," Bush warned that an independent press is essential to democracy and that denouncing the press at home makes it difficult for the United States to preach democratic values abroad.

As you head out for your drive home, check out our live blog for the latest traffic updates and road conditions across Tampa Bay.

A foster mother has been charged in the death of a 17-month-old boy who died in a hospital with apparent head injuries just weeks before he was likely to be adopted. Latamara Stackhouse Flythe was charged with first-degree murder and aggravated child abuse in the death of Aedyn Agminalis, who died Dec. 11 after he was rushed to St. Joseph's Hospital for Children.

Tampa's beleaguered LM Funding America has staved off one legal threat even as it still faces another. A federal judge in Tampa last week denied a request to certify a class action lawsuit against LM Funding, which buys the rights filed to collect unpaid homeowner associations fees. The ruling by Judge Charlene Edwards Honeywell came in a suit alleging that LM Funding and a related company, Business Law Group, tried to collect more fees than they were owed. Although the case will continue, the plaintiff's failure to win class-action certification "is a huge win'' said R. Dean Akers, LM Funding's chief operating officer.

A woman shot to death in Brandon on Friday wrote out her fears about her partner's estranged husband four months earlier in a petition to a judge. Sheriff's investigators say the man, Vicente Fuillerat, did return to the home where Routenberg lived with Fuillerat's wife, Lisa Fuillerat, shooting them to death with a shotgun before turning the weapon on himself. Lisa Fuillerat was a sixth-grade math teacher at Lake Gibson Middle School, and Routenberg was an assistant principal there. Students and staff were greeted by grief counselors and a growing memorial on their campus today.

Lightning general manger Steve Yzerman stressed the importance of gaining cap space with goaltender Ben Bishop's trade to the Kings. Yzerman likes the defensive prospect the team received in Erik Cernak, and feels veteran goaltender Peter Budaj can help Andrei Vasilevskiy lead the Lightning into the playoffs. But Yzerman admits that if he was going to move Bishop, there wasn't much of a market for goaltenders.

Tuesday, in celebration of Twenty One Pilots' sold-out concert at Amalie Arena, local alt-rock station 97X is switching its name to "Blurryface Radio" in recognition of a Grammy-winning band it's supported since the beginning. Starting at midnight Monday, the band will weave even more Twenty One Pilots into its regular rotation, including live, rare and exclusive tracks throughout the day.

March is beginning to look a lot like Christmas with its immense lineup of new shows and movies coming to Netflix in the next 31 days. The 'Jurassic Park' trilogy, Marvel Comics' 'Iron Fist' and 'The Craft' are among the new offerings.

Red Velvet, by British actor and playwright Lolita Chakrabarti, has already made a useful contribution by dramatizing the work of Ira Aldridge, an African-American who became one of the 19th century's most celebrated actors. The play, often with a light touch, highlights the many ways in which an embedded racism continues to operate, defining and often fragmenting relationships. Freefall's production, directed by Christopher Rutherford, is a solid piece work, held together by strong performances throughout the ensemble, all the way to costumes by Amy Cianci and Eric Davis' spare but effective set design.

Afternoon update is a weekday feature from tampabay.com. Check in Monday through Friday for updates and information on the biggest stories of the day.