Adam Jones swung at the first pitch he saw on Sunday and the ball was never seen again. His solo homer to left might still be up there. It was last spotted sailing over the party area and then the palm trees and whatever else is outside of Ed Smith Stadium... 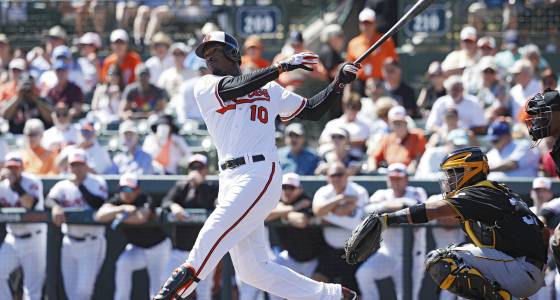 Adam Jones swung at the first pitch he saw on Sunday and the ball was never seen again. His solo homer to left might still be up there. It was last spotted sailing over the party area and then the palm trees and whatever else is outside of Ed Smith Stadium on that side of the property.

Of course, the obvious question was whether the wind was blowing out in that direction, and it was not, but the ball did seem to be carrying well in all directions on a cloudless, 74-degree afternoon. Pittsburgh Pirates prospect Eric Wood cleared the left field fence in the second inning with a ball that was not hit nearly as hard off Miley.

Though the game did not evolve into a major homerfest, a few more balls cleared the fences in the Orioles’ home exhibition opener as the O's and Pirates traded single-run innings until the O’s scored five times in the seventh to emerge with a 8-3 victory before a crowd of 6,976.

Miley gave up just the one run through two innings and Manny Machado deposited his first hit of the Grapefruit League season over the right field fence in the fifth. Rule 5 draftee Aneury Tavarez broke a 3-3 tie with an RBI single in the seventh.

First base prospect Trey Mancini broke the tight game open with a bases-loaded double into right field to score Tavarez and Robert Andino, and the Orioles scored three more times in the inning to turn it into a rout.

Left fielder Hyun Soo Kim entered the game hitless in his first three at-bats of the Grapefruit League season and struck out his first time up Sunday, but he lined an RBI single to left field in the second inning to register his first hit in his fifth at-bat of spring.

Don’t need to remind anyone that he didn’t get his first hit of the exhibition season last year until his 24th at-bat.

New Orioles starting catcher Welington Castillo delivered an impressive exhibition debut with a single in his second at-bat and a seventh-inning double that set up the go-ahead run. He also threw out Pirates shortstop Alen Hanson trying to steal second in the fifth.

Castillo was questionable to start the game after missing Saturday’s game in Bradenton with a sore neck.

Jonathan Schoop doubled in his first at-bat Sunday after hitting a double in three trips in Saturday’s game in Bradenton. Orioles fans in Sarasota will get only one more chance to see him before he leaves to join the Netherlands for the World Baseball Classic. He is expected to start Monday’s home game against the Yankees.