Orioles center fielder Adam Jones continued his sizzling start to spring training Wednesday afternoon, driving in three runs – including his second home run of the Grapefruit League season – in the Orioles’ 12-5 win over the Boston Red Sox at Ed Smith... 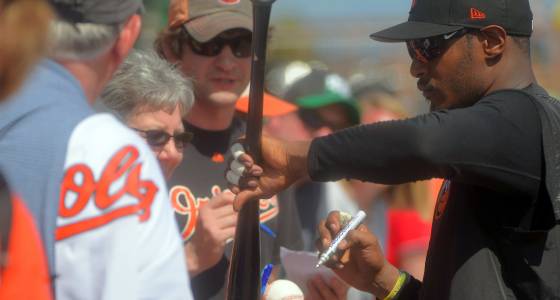 Whether Jones settles into the No. 2 spot of the batting order – which is where he has hit exclusively this spring – remains to be seen, but he has performed extremely well there so far. In four Grapefruit League games, Jones is 5-for-11 with four of those hits for extra bases (two doubles and two home runs).

Jones’ first-inning home run off Boston left-hander Henry Owens started the scoring for the Orioles, and his two-run single with two outs in the third inning off right-hander Tyler Thornburg broke the game open, giving the Orioles a 8-3 lead.

With the bases loaded, Jones hit a sinking liner to left that skipped past Andrew Benintendi and cleared the bases. Jones landed on second and was credited with a single and two RBIs, and Benintendi was charged with a fielding error.

Wednesday’s game was one of Jones’ last ones before he leaves the club to join Team USA for the World Baseball Classic. The Orioles have just two more home games before Jones departs on Monday.

"Adam played about seven innings in about three innings," Orioles manager Buck Showalter said. "He ran all over the field. He’s ready to go. I think he’s ready to head [to the WBC]."

Castillo recorded two hits Wednesday, including an RBI double with two outs in the Orioles’ four-run fourth inning off Owens.

"Welington's a pretty good offensive player," Showalter said. "With catchers, [you see] the toll it takes. He's been pretty fun to watch."

Castillo is 4-for-8 in three Grapefruit League games this spring.

Davis getting on base: First baseman Chris Davis recorded his first spring hit with a first-inning single, but he’s still managing to get on base often.

Davis reached base three times on Wednesday, including two walks to give him four on the spring.

Davis is just 1-for-5 this spring, but owns a .625 on-base percentage with the walks.

Johnson – the son of Triple-A manager Ron Johnson – signed a minor league deal with the club last month. He has played in five of the Orioles’ six Grapefruit League games and his 15 plate appearances are the most on the team.

Wednesday was a mixed bag for Johnson, who committed a throwing error on the first plate of the game, a miscue that ended up costing the Orioles when Benintendi immediately followed with a two-run homer.

Johnson made up for the error with a two-run double in the first inning that gave the Orioles a 4-1 lead. Johnson is 4-for-13 this spring with two doubles.

Coyle steps up: Second baseman Sean Coyle, brought up from minor league camp, hit a three-run homer to left with two outs in the seventh.

It was the second straight game Coyle came up with a big hit after being inserted in the last innings. He hit a two-run double in Tuesday’s road game against the Philadelphia Phillies in Clearwater, Fla.