SEASIDE HEIGHTS -- It was a collective cry heard round the beach as more than 6,700 plunged into the Atlantic Ocean on Saturday for the 24th annual Special Olympics Polar Bear Plunge.  "Not bad at all," said Anthony Cavallo, 50, after he... 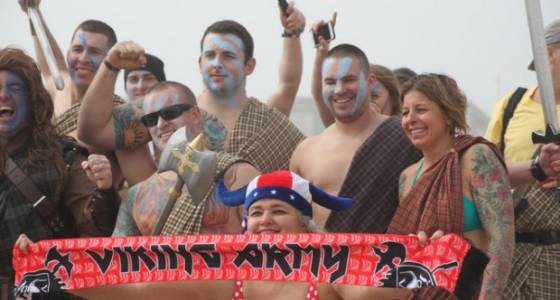 SEASIDE HEIGHTS -- It was a collective cry heard round the beach as more than 6,700 plunged into the Atlantic Ocean on Saturday for the 24th annual Special Olympics Polar Bear Plunge.

"Not bad at all," said Anthony Cavallo, 50, after he emerged from the water in a red, white and blue tutu. "I dived all the way in, it was definitely warmer this year."

The water was about 44 degrees and the temperature around 54 degrees, according to organizers, much warmer than in years past. Shortly before the 1 p.m. plunge, thousands crowded the beach dressed as Vikings, polar bears and even Santa Claus.

"You jump in and a part of you freezes in place," said Shawn Simpkins, 28, of Hamilton, who wore a polar bear hat. "It's like a battle cry going in."

The annual event raises money for the New Jersey Special Olympics and organizers say they expect to raise more than $1.7 million this year.

"Equally as important is to raise awareness," said Kevin Burke, who chaired the event. He said people need to know "there's programs out there for young children, young adults with developmental disabilities.

The Special Olympics serves more than 25,000 athletes in New Jersey.

Plungers on Saturday, each had their own strategy: Some were eager to be the first in the water, others planned to hover near the back.

"The strategy is not to be in the front of the line because then you can't get out," said Freddie Meabe, 41, of Jackson.

A longtime participant in the plunge, Sedeyn said this year the weather was forgiving.

"This is like Hawaii," he said as he soaked in the sun.