ELIZABETH -- A fifth person has been arrested in a 2014 violent armed robbery of a city scrap yard and a shootout with police on Routes 1&9, authorities said.  In April 2014, police cars surround a truck that was stopped on North Avenue in Elizabeth... 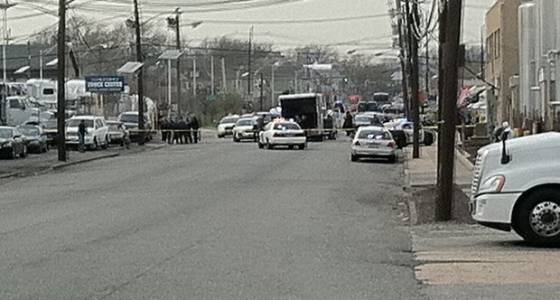 ELIZABETH -- A fifth person has been arrested in a 2014 violent armed robbery of a city scrap yard and a shootout with police on Routes 1&9, authorities said.

In April 2014, police cars surround a truck that was stopped on North Avenue in Elizabeth following an armed robbery and a shootout. (Tom Haydon/The Star-Ledger)

The men are accused of going to the Bayway Scrap Metal yard on Amboy Avenue on April 18, 2014, binding several people's hands and feet with zip ties, and assaulting them while armed with guns.

They stole wallets and cash, filled a trailer with catalytic converters and fled in two cars, one of which was a stolen pickup truck, Park said.

Police briefly chased the men on Routes 1&9 before one of the men fired a gun at the officers and police returned fire, Park said. No one was injured in the shootout, she said.

The getaway cars crashed on North Avenue East, and four of the men were arrested and held on $1 million bail each. Police previously said they recovered an automatic rifle, a sub-machine gun, three handguns and a bag of money.

Three employees of the scrap metal shop were treated at a hospital for minor injuries, police said.

Brailsford was at large until authorities arrested him Friday, Park said.