4 out of every 5 veterans are overweight. Why?

A family funeral convinced one local veteran that he needed to lose weight, so he joined the MOVE program at Edward Hines Jr. VA Hospital near Maywood."He couldn't fit into his funeral suit anymore," said Lisa Korpolinski, the MOVE program coordinator.... 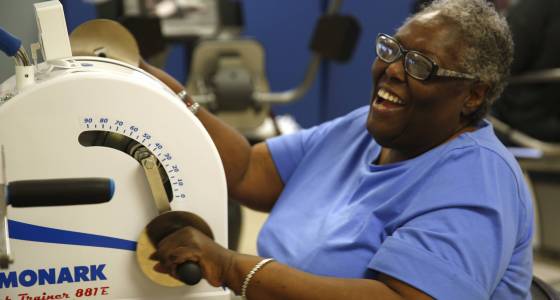 A family funeral convinced one local veteran that he needed to lose weight, so he joined the MOVE program at Edward Hines Jr. VA Hospital near Maywood.

"He couldn't fit into his funeral suit anymore," said Lisa Korpolinski, the MOVE program coordinator. "He ended up losing 80 pounds. He came to class on the last day and he brought his suit, and he could wrap it all the way around himself."

It's one of many success stories the MOVE program has seen since it started 10 years ago, but there is still much work to be done when it comes to veterans and weight loss.

While nearly 35 percent of Americans are obese, 78 percent of veterans are overweight or obese, and nearly one out of four is diabetic, according to the U.S. Department of Veterans Affairs.

These are shockingly high numbers the VA has been working hard to bring down.

The Daily Herald will help the cause by exclusively featuring veterans during this year's Fittest Loser Challenge, which begins today.

What is it about military service that increases the likelihood of being overweight?

The reasons vary, experts say, but studies show veterans are more likely to have disabilities, depression, and Post-Traumatic Stress Disorder (PTSD) than the average civilian, all of which can contribute to being overweight.

Some veterans in Hines VA's MOVE program speculated it also might be triggered by the struggles of acclimating to civilian life, medication side effects, or just age. Most Vietnam veterans are now in their 60s and 70s.

"The older you get, the harder it is to move. It takes more effort," Navy veteran David Griner, 72, of Villa Park, said as he walked on the treadmill.

MOVE has been one of the VA's most successful tools in helping veterans, because it's a comprehensive lifestyle program that tackles the problem on several levels. It's offered free to veterans at all VA hospitals and community-based outpatient clinics, including locations in Aurora and Hoffman Estates.

The program has 14 classes over a six-month period that focus on exercise, diet and lifestyle, with optional add-ons, such as a 10-week physical activity component or TeleMOVE, a monitor that allows for daily check-ins, updates and inspiration.

"Even if you gain weight that day, they say, 'It's OK. Don't worry about it. Just keep moving,'" said Karol Busse, 67, an Army veteran from Berwyn who's lost 30 pounds since starting MOVE. "People tend to beat themselves up about it, and then say, 'Well, I can't do this.' But in this program, from every direction, you get positive reinforcement."

It's not necessary to go to a VA facility to participate in MOVE -- it's also offered online and in an app.

"It's one-third behavioral, one-third physical activity, and one-third lifestyle," Korpolinski said. "The goal is for them to be able to self-manage. We don't look at it as temporary change, but long-term change. We help them see inside themselves, and the strength they have."

Mike Sabatino, 66, an Air Force veteran from Westchester, has had all sorts of health problems since being exposed to Agent Orange during the Vietnam War, which he said contributed to his weight gain. MOVE taught him to make small, realistic changes, like lifting weights while he's sitting and watching TV, ordering his beloved Portillo's beefs less regularly and without the bread, and avoiding gas station snacks when he fills up his tank. He now opts for the Southwest Grilled Chicken Salad at McDonald's, and fills a coffee mug, rather than a large bowl, with ice cream when he's having a treat.

Sabatino said he's only lost a few pounds so far, but he feels much better and stronger thanks to regular exercise.

"You've got to get involved," he said, as he rode a bike at the Hines VA exercise room. "You can't just sit on the couch."

Korpolinski said she's seen consistently good results since she started teaching the program 10 years ago. She estimates people lose an average of 15 pounds, but just as importantly, they feel better about themselves. Many are thrilled to be able to reduce their blood pressure, diabetes or cholesterol medicine.

"A lot of them tell me they feel like they got their life back," she said. "It's reinvigorated their faith in themselves, that they could make a change in their life and feel good about it."

Vets: 'From every direction, you get positive reinforcement'