Detectives are investigating an early morning South Shore shooting that sent three people to area hospitals. About 8 a.m. Saturday, police got multiple calls about a shooting in the area of East 74th Street and South Baldwin Avenue. Emergency... 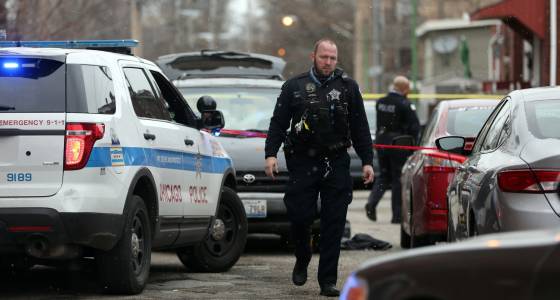 About 8 a.m. Saturday, police got multiple calls about a shooting in the area of East 74th Street and South Baldwin Avenue. Emergency responders arrived and found two men and a woman wounded and all three were taken to hospitals for treatment of gunshot wounds.

Soon after, police squeezed their vehicles into the 7400 block of Baldwin, in an alley lined with garages and garbage bins. They taped off the area around a minivan, which sat near 75th Street, its back window shattered and hollowed out. Snowflakes drifted to the ground as police investigated the scene.

"There are two or three guns down there," an officer said, pointing to the area near the van. "And one down here." He pointed toward the property of a home near 74th, about four houses down from the van.

A cat prowled along the taped-off area as police knocked on neighbors' doors. No witnesses appeared to be at the scene.