RIVERSIDE, CALIF.—Three people died and two were injured, one critically, when a small plane carrying them home from a cheerleading competition slammed into two Southern California homes and sparked a raging fire, authorities and witnesses said.The... 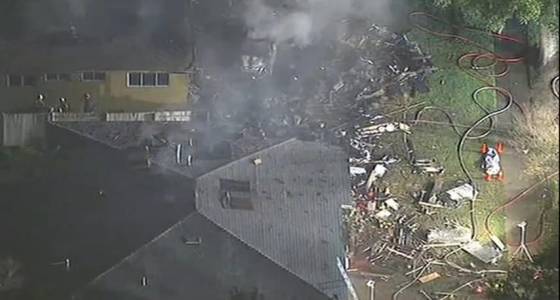 RIVERSIDE, CALIF.—Three people died and two were injured, one critically, when a small plane carrying them home from a cheerleading competition slammed into two Southern California homes and sparked a raging fire, authorities and witnesses said.

The twin-engine plane with five occupants had just taken off from Riverside Municipal Airport at 4:40 p.m. Monday intending to return to San Jose after the weekend Disneyland event when it crashed about a mile away in the residential neighbourhood, Riverside Fire Chief Michael Moore said.

One of the survivors was hospitalized with critical burns and the other was in stable condition, police Officer Ryan Railsback said Tuesday. He said both were adult women recovering after undergoing surgery.

The remains of an adult woman were removed from the wreckage, which was still smouldering the morning after the crash, Railsback said.

The bodies of an adult man and a female teenager remained the site of the crash that destroyed two suburban houses and sent debris flying down the block of single-family homes. One of the plane’s propellers landed on a rooftop.

“It’s unrecognizable really as a plane,” said Railsback, who added that it was “remarkable” no one on the ground was hurt.

One of the destroyed houses was empty at the time and a man escaped the neighbouring home without suffering injuries. Nearly all of about 40 residents evacuated after the fiery crash returned home.

One of the survivors was thrown from a back seat of the plane but suffered only minor injuries, Moore said.

Three witnesses told TV stations one survivor crawled from the home asking for help. She was able to talk to firefighters about what had happened as she was taken to a hospital, Moore said.

Police said the airport’s control tower called local authorities after the plane went down. Investigators with the National Transportation Safety Board will try to determine what occurred in the minutes after takeoff.

Witness Brian Marsh, driving nearby, said he saw the Cessna turn moments before the crash.

“All of a sudden it turned into a freefall,” he told the Press-Enterprise. “Flames were everywhere. Smoke was billowing out.”

Ken Sampson told the newspaper the flames shot so high that he could see them from his house six blocks away.

Firefighters entered one of the burning houses and pulled out another passenger, who was unconscious.

“It’s horrible,” Moore said, especially given that they had gone to a cheerleading competition and it was “supposed to be a happy time.”

Authorities initially said four people died, and that the critically injured victim was a resident of the homes. They later reduced the death toll to three and said all five victims had been on the plane. They have not given the ages or identities of the victims.

Moore did not provide the name of the cheerleading competition, but the Jr. USA Nationals for girls age 15 and under was held at Disney California Adventure Park over the weekend. Officials with the competition did not immediately return calls Tuesday.

The two homes that were hit directly were destroyed, and there was minor damage to neighbouring houses, Moore said.

H.L. Reyes, who lives about a quarter-mile from the crash site, told The Associated Press she felt the ground shake and saw plumes of black smoke.

“I thought it was a possible earthquake, and we heard all the birds just suddenly react outside, too,” Reyes said. “This was just like a nightmare coming true.”

Shannon Flores, a teacher at an elementary school about three blocks away, said she saw the plane out her classroom window. She said it was raining during the crash, though other witnesses said the rain was very light.

“As soon as we saw it fly over, we knew it wasn’t a good thing,” Flores told KABC-TV. “We watched it go down very quickly ... Before we knew it, there was a loud crash and huge plumes of smoke.”