Three people were shot to death and 11 other people were wounded in shootings since Tuesday morning, according to officials.A 22-year-old woman was shot dead about 11:35 p.m. in the 10700 block of South Indiana Avenue in the Roseland neighborhood on the city's... 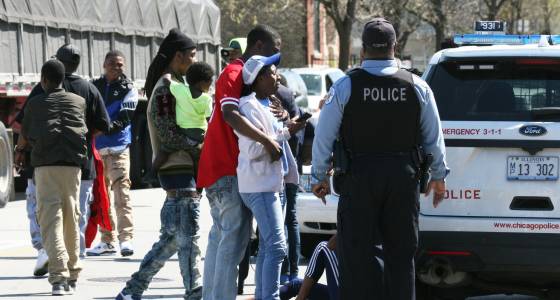 Three people were shot to death and 11 other people were wounded in shootings since Tuesday morning, according to officials.

A 22-year-old woman was shot dead about 11:35 p.m. in the 10700 block of South Indiana Avenue in the Roseland neighborhood on the city's Far South Side.

Officers responded to a call of a person shot and found the woman on the sidewalk with gunshot wounds to her abdomen and left ankle. She was taken in critical condition to Advocate Christ Medical Center, where she was later pronounced dead.

The double fatal shooting happened about 8:15 a.m. in the 5100 block of South Halsted Street.

The woman, 22, and the man, 25, were sitting in a vehicle when two people stepped from another vehicle and started shooting, police said.

Both were pronounced dead at the scene. No one was in custody.

About 11:20 p.m., a 20-year-old man was shot in the back while he was in the 300 block of North Laramie Avenue in the South Austin neighborhood, police said. His condition was stabilized at Stroger Hospital.

In the West Lawn neighborhood, a 19-year-old man was seriously wounded in a shooting about 10 p.m. near the Hubbard High School. The 19-year-old man was walking in the 6100 block of South Hamlin Avenue when two men approached him and said gang phrases. One of the men then got out a gun and opened fire, striking the 19-year-old man in the left leg. He was taken in serious condition to Advocate Christ Medical Center.

About 9:30 p.m., a 19-year-old man was shot in the right arm during a drive-by shooting in the Lawndale neighborhood, police said. He was standing near a parked vehicle in the 1200 block of South Komensky Avenue when someone inside a passing maroon vehicle fired shots. He was taken in good condition to Mount Sinai Hospital.

In the Uptown neighborhood on the city's North Side, a 21-year-old man was shot multiple times about 9:30 p.m. while he was in the 4500 block of North Clarendon Avenue, police said. He was taken in critical condition to Illinois Masonic Medical Center.

Two men were wounded in a drive-by shooting about 7:30 p.m. in the 2900 block of West Augusta Boulevard in the Humboldt Park neighborhood, police said. The shooter was inside a black vehicle that drove by and opened fire. A 36-year-old man suffered a gunshot wound to the right forearm and a 30-year-old man had a gunshot wounds to the right calf and left ankle, police said. Both men got themselves to Norwegian-American Hospital where their conditions had stabilized, police said.

Another shooting happened about 4:55 p.m. and occurred during a carjacking on the Southwest Side. A 32-year-old man was in a parked car in the 3700 block of South Archer Avenue in the Brighton Park neighborhood when a gunman approached him and fired shots, hitting him in the chest, police said. The shooter fled in the man's white car as paramedics took the 32-year-old man to Mount Sinai Hospital, where his condition had stabilized, police said.

Two people were injured in another attack, which took place about 4:15 p.m. in the Englewood neighborhood. A 17-year-old girl and a 23-year-old woman were outside in the 6000 block of South Halsted Street when a group of assailants began firing at them, according to Chicago Fire Department spokesman Jeff Lyle and police. The teenage girl suffered a gunshot wound to the abdomen and she was taken in critical condition to Stroger Hospital and the 23-year-old was shot in the hand and also taken to Stroger where her condition  had stabilized, police said.

About 11:15 a.m. on the South Side, a 17-year-old boy was in the 3400 block of South State Street in the Bronzeville neighborhood when someone shot him in the buttocks, police said. He was taken to Northwestern Memorial Hospital, where his condition had stabilized.

About 10:55 a.m. on the West Side, an 18-year-old man was shot in the back by someone in a red SUV in the 200 block of North Karlov Avenue in the West Garfield Park neighborhood. His condition was stabilized at Mount Sinai Hospital.

No arrests have been made in the attacks and police are investigating.

Check back for updates.