A suspect is in custody after 28 people were injured Saturday when a vehicle plowed into a crowd watching the Krewe of Endymion parade in the Mid-City section of New Orleans, police said.Police Chief Michael Harrison said the suspect is being investigated... 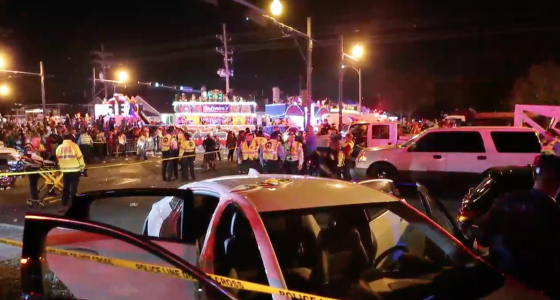 A suspect is in custody after 28 people were injured Saturday when a vehicle plowed into a crowd watching the Krewe of Endymion parade in the Mid-City section of New Orleans, police said.

Police Chief Michael Harrison said the suspect is being investigated for driving while intoxicated. Harrison was asked twice by the media if terrorism was suspected. While he didn't say "No" he did say it looks like a case of DWI.

"We suspect that that subject was highly intoxicated," he said.

The victims range in age from as young as 3 or 4-years-old to adults in their 30s and 40s, said Selder.

Among the injured was one New Orleans police officer. Harrison said the officer, who was on duty, was undergoing tests to determine the extent of her injuries. She was in "good spirits," he said.

One woman at the scene told The New Orleans Advocate (http://bit.ly/2miOHGP) that a silver truck whisked by her just feet away as she was walking through the intersection.