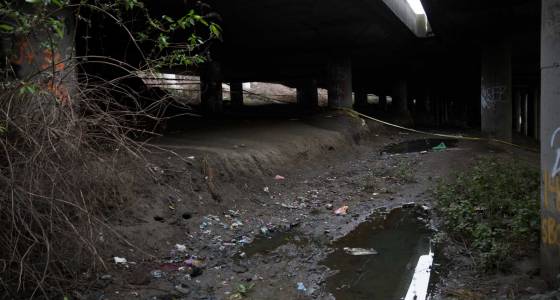 Nghia Nguyen, 47, and James J.A. Walker, 27, were charged with rape for their relationships with two girls, ages 16 and 13, at homeless camps in the Sodo area, including areas of the Jungle.

Another 16-year-old girl was also linked to one of the men, but prosecutors have not filed charges for any assault involving her.

The King County Sheriff's Office fielded a tip Jan. 5 about a teen being held against her will at gunpoint in a tent across the street from the South Dearborn Street Goodwill store. The Sheriff's Office passed the report to Seattle police.

No one else was in the tent at the time. Detectives determined the girl was a runaway from New Jersey who was reported missing Nov. 27, 2016.

The girl told police she was staying in the tent with a man named "Asian Mike" and admitted he had a handgun inside the tent, according to court reports. She claimed he was out fetching propane at the moment.

Detectives took the girl back to the Seattle Police Department VICE office. Meanwhile, a search warrant allowed officers to find a pellet gun and documents inside the tent of "Asian Mike," that identified him as Nhan V. Hguyen, AKA Nghia Nguyen.

During an extensive interview, the girl told detectives that she ran away from home in November due to problems at home. She initially stole her father's car and headed for San Diego, Calif., but was detained in Iowa. She then took a Greyhound bus from New York to Seattle, police reports indicate.

As soon as she arrived in Seattle, she met several people camped in Sodo outside the Greyhound station on South Royal Brougham Way and Sixth Avenue South, according to police. The girl allegedly told police she stayed with several different people in the next few weeks, many of whom raped her and forced her to prostitute herself.

One man who took her in raped her and then forced her to leave after she refused to sell herself for sex, reports indicate. Other men fought over her and the "services she could provede," according to Seattle police. She claimed she was "passed around" among different tents for sleep and care until people running the Sodo encampment grew upset with her for "causing so much turmoil," court records say.

One day, she was reportedly sold to a man who raped her with another man in a van, she told detectives.

Finally, a man who went by "Asian Mike" took custody of her, telling the woman who was taking care of her that "a lot of people ... would love to have sex or just spend time with [her] and smoke drugs for money," police reported.

The girl claimed she agreed to go with Asian Mike, or Nguyen, for a safe place to stay, but she did not want to have sex with him. However, he still raped her and she submitted to regular sex with him in the ensuring weeks, according to charging documents. She said that Nguyen would give her drugs, money and food, but restricted her from using heroin. Instead, they used methamphetamine, crack cocaine and marijuana, she claimed.

Eventually, Nguyen grew jealous of the other people the girl interacted with and tried to isolate her, reports indicate. She told detectives he pointed his gun at her and threatened to "blow off her knee caps" if she left him. After she talked back to him, he allegedly pointed his gun at her head and threatened to shoot and kill her. He also threatened to kill her if she ever cheated on him. Nguyen also reportedly called her his daughter, despite his sexual assaults.

The girl also said Nguyen regularly threatened people and chased people who owed him money with his gun.

The girl said she was making plans to leave Nguyen when police found her. She also claimed at least six other minor girls were staying in the Jungle area near the Greyhound bus station.

The 16-year-old was ultimately sent to the Youth Services Center, where authorities worked with Idaho to transfer her back home, court documents indicate.

Police fielded another call Jan. 25 about an endangered girl at the Sixth and Royal Brougham camp -- this time a 14-year-old girl that the 16-year-old girl knew.

The 13-year-old girl admitted she was sexually assaulted and exploited by several people at the homeless camps in the area, including Nguyen, Seattle police claim. Though detectives tried to place her in a shelter, she ran away from the home and was found Jan. 28 at a motel on East Marginal Way.

There, police could not find the 14-year-old girl, but found a 16-year-old who appeared to be under the influence of crystal meth, documents say. Detectives determined she had also been assaulted by Nguyen.

Cops found Nguyen after a tip on Feb. 2 at 14th Avenue South and East Yesler Way. He denied having sex with any of the girls linked to him and denied even knowing the 14-year-old girl. He said he was being framed by homeless teens, detectives wrote.

Police arrested Nguyen, who had two other warrants for his arrest.

While looking for the 14-year-old girl, detectives came across a 27-year-old man she had previously mentioned as being her boyfriend, reports indicate. The man, later identified as Walker, admitted to having a sexual relationship with the girl beginning when she was 13. She reportedly claimed she was older than she was.

Walker allegedly told detectives he supplied her with drugs and that she had sex with several other men at the homeless camp at Sixth and Royal Brougham.

He went on to say that regardless of whether it's happening in a homeless camp, hotel or in someone's home, police want people to report anything they see or hear to police.

"It's really critical that people who lvie in encampments who are aware of crimes or who are themselves victims of crimes have the confidence to report to us," Whitcomb said. "We don't care where you're camped, we want to know who did it."

However, runaway children are a vulnerable population who can't be legally detained against their will or be forced to return home, he added. Often, they don't want help or rescuing.

"Our No. 1 priority is the safety of everyone who lives in Seattle," Whitcomb said.