100 headstones toppled at a Jewish cemetery in Philadelphia | Toronto Star

The police in Philadelphia found about 100 toppled headstones at a Jewish cemetery on Sunday, less than one week after a similar discovery was made in Missouri.Responding to a report of vandalism at the Mount Carmel Jewish Cemetery in northeastern Philadelphia,... 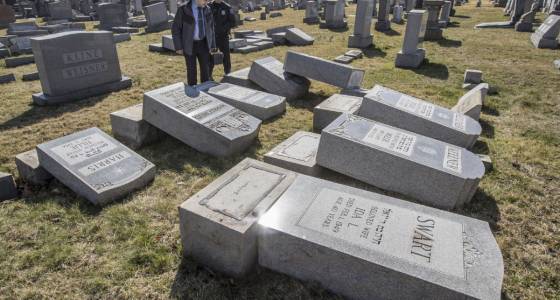 The police in Philadelphia found about 100 toppled headstones at a Jewish cemetery on Sunday, less than one week after a similar discovery was made in Missouri.

Responding to a report of vandalism at the Mount Carmel Jewish Cemetery in northeastern Philadelphia, the police said a man told them that three headstones belonging to his relatives had been knocked over and damaged.

Officers said they counted about 100 damaged headstones, which were most probably toppled sometime Saturday night. They did not say if they had identified suspects or a motive.

The episode drew almost immediate comparison to a similar discovery last Monday in University City, Missouri, where more than 150 headstones were toppled at the Chesed Shel Emeth Cemetery. Also on Monday, 11 bomb scares were called into Jewish community centres across the United States, the fourth wave of such threats this year. A community centre in Philadelphia was among those targeted in the first round.

State and local officials denounced the destruction at the Mount Carmel Jewish Cemetery, describing it as an act of vandalism.

“We are doing all we can to find the perpetrators who desecrated this final resting place, and they will be prosecuted to the fullest extent of the law,” Mayor Jim Kenney said. “Hate is not permissible in Philadelphia.”

President Donald Trump issued on Tuesday his first condemnation of the mounting threats to Jewish people and institutions, after weeks of complaints from Jewish leaders that he had been unwilling to forcefully denounce such acts.

After the discovery on Sunday in Philadelphia, three groups offered a combined $13,000 for information leading to the arrests of those responsible, the police said.

It will cost at least $450 to $500 to repair each headstone, said Naomi Adler, the chief executive of the Jewish Federation of Greater Philadelphia, which is collecting online donations for the repairs and cleanup.

“It’s horrific; it’s a desecration of a sacred Jewish space,” she said.

The cemetery’s caretaker could not be reached for comment, but Adler said the caretaker was working with the police to assist in the investigation and assess the damage. The police have also vowed to step up patrols of local Jewish institutions, Adler said.

There are about 220,000 members of the Jewish community in the Philadelphia area, she said.