Two men were wounded, one of them fatally, during a shooting on a ramp for the Dan Ryan Expressway in the Chinatown neighborhood Wednesday evening, while two police officers were injured in a crash not far south while they were responding to the shooting,... 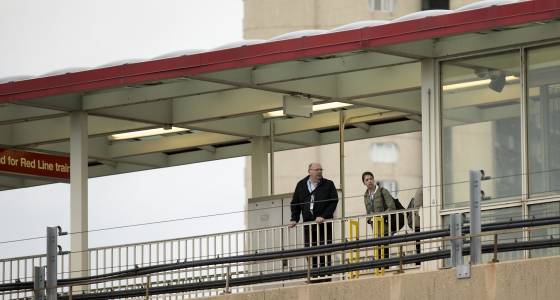 Two men were wounded, one of them fatally, during a shooting on a ramp for the Dan Ryan Expressway in the Chinatown neighborhood Wednesday evening, while two police officers were injured in a crash not far south while they were responding to the shooting, authorities said.

One man was dead on the scene and another was wounded and taken to a local hospital after an attack near Cermak Road and Wentworth Avenue, according to a Chicago Fire Department spokesman.

The shooting took place on I-94 northbound at the exit to Cermak Road about 5:10 p.m., according to an emailed statement from Illinois State Police.

Two Chicago police officers and two other people were injured in a crash that took place soon after near 31st Street and Shields Avenue, the spokesman said. The officers were being taken to Stroger Hospital, while the two other people were being taken to Northwestern Memorial Hospital, also initially in serious-to-critical condition. None of the injuries were not believed to be life-threatening, and their conditions were stabilized, according to fire officials.

One officer was in serious condition, while the other was in good condition, according to a police media notification, updating earlier information.

Two police officers were injured in a crash near 31st Street and Shields Avenue while they were responding to a fatal shooting in the Chinatown neighborhood on April 19, 2017.

(Eric Clark / for the Chicago Tribune)

The officers were hurt in a crash responding to the shooting scene, according to police, citing preliminary information. Other officers apprehended possible people of interest from the shooting, tweeted Chicago police spokesman Anthony Guglielmi.

A body under a white sheet lay on the exit ramp between several police cars.

Both exit and on ramps were closed. Three Chicago officers and a state police trooper searched the weeds on the side of the on-ramp for evidence.

Three helicopters, at least one of them a police chopper, circled the area above.

About an hour after the shootings, an ambulance arrived, and a handcuffed man was placed inside.

As of about 10 p.m. the northbound lanes at Cermak Road which were closed earlier were going to be re-opened shortly, said an ISP District Chicago trooper.

Anyone who witnessed the shooting or has any knowledge of the shooting should call state police, 847-294-4400.  Callers can remain anonymous.