1 killed, 4 injured, house on fire after plane crashes in Riverside

RIVERSIDE >> One person is dead and four are injured after a plane crashed into a house in Riverside Monday, says Riverside Fire Department Battalion Chief David Bakas.The crash, just before 4:45 p.m., set several houses ablaze on Rhonda Avenue, in... 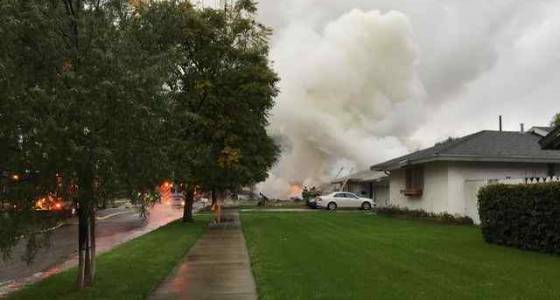 RIVERSIDE >> One person is dead and four are injured after a plane crashed into a house in Riverside Monday, says Riverside Fire Department Battalion Chief David Bakas.

Neighbors say it felt like an earthquake that was followed by a “big orange ball of fire.”

FAA spokesman Ian Gregor said the plane was a Cessna 310 whose destination was San Jose. The circumstances of the crash were not immediately known, Gregor said.

H.L. Reyes lives about a mile from the scene and said she felt what seemed like a small earthquake.

“We all jumped up,” she said. “Even the birds outside reacted”

This story is developing. Check back for updates.