US mandates vaccines or tests for big companies by Jan. 4

Tens of millions of Americans working in companies with more than 100 employees must be fully vaccinated by January 4, or have their weekly testing for COVID-19 performed according to government guidelines. 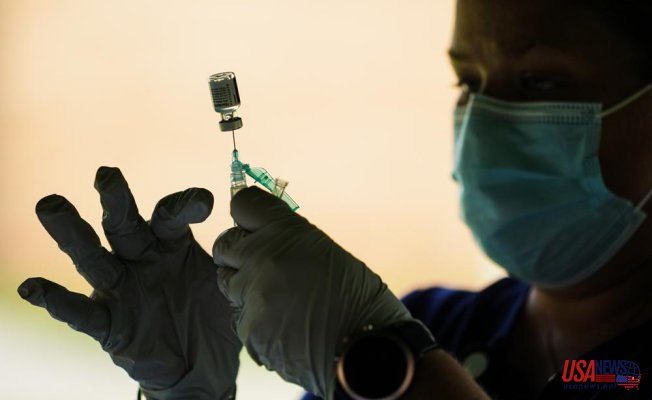 Tens of millions of Americans working in companies with more than 100 employees must be fully vaccinated by January 4, or have their weekly testing for COVID-19 performed according to government guidelines.

These new requirements represent the Biden administration’s most bold move yet in persuading reluctant Americans to get a vaccine that has been available for months. Or face financial consequences. Administration officials hope it will be a significant step towards ending the pandemic that has claimed more than 750,000 lives.

The requirements were first revealed by President Joe Biden in September. They will be applicable to approximately 84 million employees of medium-sized and large businesses. However, it is unclear how many of those employees have not been vaccinated.

Companies will be required to have unvaccinated employees test negative for COVID-19 at work every other week.

OSHA allowed the possibility for smaller businesses to be included in the requirements. OSHA invited public comments on whether testing or vaccination programs could be handled by employers with less than 100 employees.

For another 17 million people who work in hospitals, nursing homes, or other facilities that receive money through Medicare and Medicaid, there will be stricter rules. These workers won't have the option to test -- they will have to be vaccinated.

Workers can ask for exemptions based on religious or medical grounds.

These requirements do not apply to those who work from home or outside.

Biden stated that the choice was simple: get more people vaccinated, or prolong the pandemic.

He said in a statement Thursday that "while I would prefer that no requirements be made, there are too many people who remain unvaccinated to end this pandemic for good."

Biden stated that his encouragement of businesses to impose mandates, and his previous requirements for federal contractors and the military have helped to reduce the number unvaccinated Americans from about 100 million in late-July to 60 million today.

He said that these measures have not resulted in mass firings or worker shortages. He also stated that vaccines were required previously to combat other diseases.

OSHA warned that companies who fail to follow the regulations could be subject to penalties of up to $14,000 per violation.

Enforcement challenges will be faced by the agency. OSHA has just 1,850 inspectors to supervise 130 million workers in 8 million workplaces. This is despite the help from other states. A government official stated that the agency would respond to whistleblower claims and conduct limited spot checks.

After weeks of regulatory review, meetings with labor unions and business groups, the rules were finally released.

OSHA created the rules in an emergency situation to protect workers from a health hazard. According to OSHA, the mandated vaccine will prevent the deaths of more than 6,500 workers and more than 250,000 hospitalizations in the next six months.

OSHA's parent agency, Labor Department, claims it is on solid legal footing. Seema Nanda (the top official in the department's legal department) stated that OSHA rules override any conflicting state laws and orders. This includes those that prohibit employers from requiring face masks, testing, or vaccinations.

The petition was launched by Senate Republicans to demand a vote on the repeal of the vaccine mandate. However, with Democrats in control, it is almost certain to fail.

Workers must receive two doses of either the Moderna or Pfizer vaccines by January 4, or one dose of Johnson & Johnson vaccine. Workers who test positive for the disease must be removed from their workplace.

Unvaccinated workers won't need to be tested by companies. However, employers must provide paid time off to employees so they can get shots and sick leaves to treat side effects. Dec. 5th will see the introduction of requirements for masks and paid time off to receive shots.

Employers who are subject to the requirements must verify that their employees have been immunized by reviewing documents, such as CDC vaccination cards and records from doctors and pharmacies.

The Centers for Medicare & Medicaid Services issued a separate regulation requiring vaccination for 76,000 workers in health care facilities and home-based providers who receive funding from the government's health programs. Senior administration officials stated that several large private healthcare organizations had imposed their own vaccination mandates and managed to achieve high vaccination rates of 96% or more without widespread resignations.

Federal contractors were required to ensure that workers are vaccinated. The requirement was originally announced for Dec. 8. However, the administration delayed the implementation of the measure until Jan. 4, to comply with the requirements for large employers and health care providers. More than a dozen states have already sued to stop the mandate on contractors.

Officials from the Administration claim that these efforts have paid off with 70% of adults being fully vaccinated.

Recent trends have seen workplace vaccine mandates increase in frequency. Major corporations, hospitals, and state and local governments now require COVID-19 shots for their employees. The mandates have been met with overwhelming compliance, in some cases up to 99% of workers. However, a few vocal individuals have faced dismissal or filed lawsuits for exemptions.

United Airlines demanded that 67,000 U.S. workers get vaccinated. Otherwise, they could be fired. Only a few hundred employees refused, but about 2,000 are asking for exemptions.

Tyson Foods informed its 120,000 U.S. employees in August that they had to be vaccinated by November 1. The company announced Thursday that more than 96% had been vaccinated. This includes 60,500 who received their shots following the August announcement.

Walmart, the largest private employer in the country, announced in July that it would require all employees at its headquarters in Bentonville (Arkansas) and managers who travel within the United States, to get vaccinated by October 4. However, the retailer did not require shots for its frontline workers.

However, some businesses have expressed concern that vaccine-refractive workers might leave, making their workforce even smaller in a tight labor market.

Many corporate groups including the Business Roundtable supported the mandate. Retail groups were concerned that the mandate could cause disruptions to their business during Christmas shopping season. Retailers and others warned that it could cause supply chain disruptions.

The National Retail Federation said that the new rules were unnecessary because the average daily number of cases has dropped by more than half in the United States since September.

Although the number of infections is still declining due to the summer surge in highly contagious delta variants, the pace of decline has slowed over recent weeks. The 7-day moving mean is now at 76,000 new cases per day, which is a drop of 6% from just two weeks ago.

Opponents protested the earlier mandate on federal contractors, which led to workers at a Mississippi NASA rocket engine testing site. Some claimed they were immune to COVID-19. Others claimed that vaccines violated their constitutional rights and religious beliefs.

Engineer Nyla Trumbach stated that no one should have to undergo medical treatment in order to keep their job. "There are years and years of skill and experience out here. I want everyone who is watching to see the potential loss here if they don't get their jobs."