White House officials announced Tuesday that the Biden administration will begin distributing monkeypox vaccine throughout the country as a result of rising cases of the virus in the U. 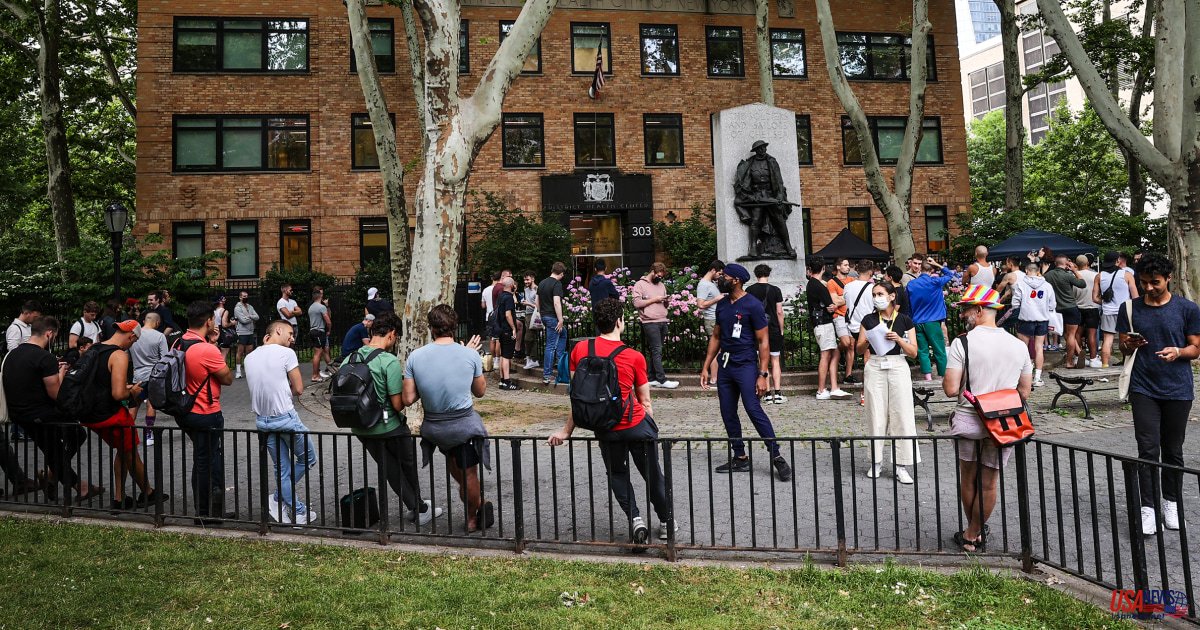 White House officials announced Tuesday that the Biden administration will begin distributing monkeypox vaccine throughout the country as a result of rising cases of the virus in the U.S.

The U.S. Department of Health and Human Services is sending 56,000 doses of Jynneos immediately to high-transmission areas. In the coming weeks, 240,000 additional doses of Jynneos vaccine will be distributed. More are expected this summer and fall. Officials anticipate that at least 1.6million doses will be available by the end the fall.

According to the Centers for Disease Control and Prevention, the states with the highest number of cases are California, New York, Illinois, Florida, and Washington, D.C.

Dr. Rochelle Wilensky, director of the CDC, stated at a Tuesday news briefing that she recommended vaccines for people with monkeypox exposures.

Most monkeypox cases in the U.S., and worldwide, were among men who had sex with other men.

While the U.S. continues to see an increase in cases, Dr. Ashish Jha (White House Covid-19 coordinator) seemed optimistic that the U.S. would be able to contain the epidemic and stressed the importance of being vigilant.

Jha stated that monkeypox was not a new disease. It has been known for many decades by the global community. It spreads quickly. We have tests to help us identify those who are infected. It is highly resistant to vaccines.

After a traveler tested positive, the U.S. monkeypox epidemic was first identified in Massachusetts in May. According to the CDC, there have been more than 306 cases of the virus in 28 states since then. Experts believe that the U.S. is likely to underestimate the number of cases due to limitations in testing.

David Harvey, executive director of National Coalition of STD Directors, stated that "we've already lost control of the outbreak." "We believe there are many more cases and we must act quickly to stop this epidemic."

New York City and Washington, D.C. were the first cities to start vaccinating monkeypox at-risk men. This includes men who had sex with multiple partners or more than one person within the last 14 days. New York was able to quickly run out of vaccines after it received 1,000 doses from CDC.

Washington officials also announced Monday that they will begin vaccinating at risk groups. After the online booking system was launched, 300 appointments were filled in under an hour.

Although the Biden administration's vaccination strategy is welcomed, there are still questions about how doses will be distributed to those most at-risk in an equitable manner, Harvey from NCSD stated in a statement following the briefing.

A more recent vaccine, which is FDA-approved for smallpox and protects against monkeypox, is also available. However, it is not recommended as it cannot be given to people who are immunocompromised or HIV positive.

The current monkeypox outbreak is spread primarily by intimate contact. This includes sex and prolonged, face-to-face interactions. Dr. Jennifer McQuiston was the deputy director for the CDC's High Consequence Pathogens and Pathology Division.

Monkeypox experts are concerned that the CDC's statistics don't accurately reflect the extent of the epidemic and that the U.S. is reacting too slowly in an effort to prevent cases from rising.

Jennifer Nuzzo, a professor of epidemiology at Brown University, Providence, Rhode Island, is the director of the pandemic centre. We must increase access to diagnostics, vaccines, and therapeutic drugs.

Walensky stated Tuesday that both commercial and public health labs can handle up to 10,000 tests per week, and that HHS plans to process even more. There is one problem: there is not yet a rapid test that is comparable to the one used to diagnose Covid.

Despite delays in testing, Anne W. Rimoin (director of the UCLA Center for Global and Immigration Health) said that it is not too late for the outbreak to be under control.

Rimoin stated in an email that "we have the capability to bring this under control by using the public health instruments needed- including case identification and contact tracing, and testing." To be able to gain a good situational awareness and see where we are really at in terms of cases, we need to quickly scale up diagnostics that are widely accessible.