SEOUL, South Korea . -- South Korea's new coronavirus infections have surpassed 4,000 per day for the first-time since the outbreak of the pandemic. The spread is a result of a delta-driven spread that continues to shake the country after it has eased social distancing in recent week to boost its economy. 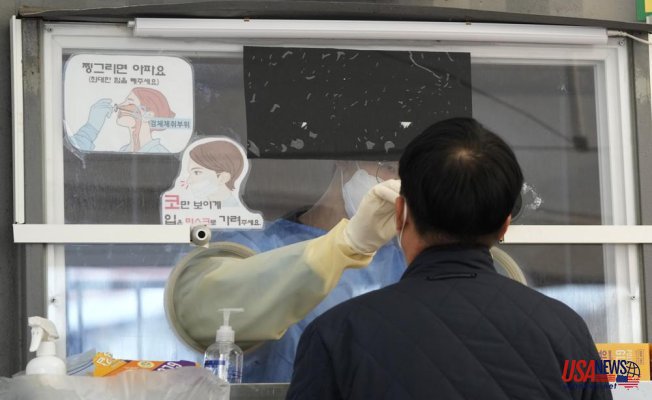 SEOUL, South Korea . -- South Korea's new coronavirus infections have surpassed 4,000 per day for the first-time since the outbreak of the pandemic. The spread is a result of a delta-driven spread that continues to shake the country after it has eased social distancing in recent week to boost its economy.

Korea Disease Control and Prevention Agency reported that most of the 4,116 new cases Wednesday were from Seoul and the surrounding metropolitan area. This is due to fears over possible shortages in ICUs and an increase in hospitalizations.

After 35 deaths from the virus in the last 24 hours, the country's death rate is now at 3,363. This new record also includes 586 patients in critical or serious condition.

South Korea is the latest to experience an increase in infections and hospitalizations after loosening social distancing policies, despite high vaccination rates. The number of cases is also rising in the United States before Thanksgiving weekend. Meanwhile, Austria was placed under lockdown Monday as the virus spreads throughout Europe.

South Korean officials relaxed social distancing regulations starting this month. Schools were reopened on Monday, in what they call the first steps towards restoring pre-pandemic normalcy. Officials hoped that increasing vaccination rates would reduce hospitalizations and deaths, even if the virus spreads further by allowing more social gatherings and longer indoor eating hours at restaurants.

Health workers now have to deal with an increase in fatalities and cases among seniors who either rejected vaccines or whose immunity has waned following the vaccination rollout in February.

Officials from the Health Ministry said that "the rise in serious cases is significantly higher than we had anticipated." Son stated that officials are monitoring the situation closely and could announce measures to tighten social distancing in the coming weeks, if the spread of the disease continues.

KDCA data shows that most virus victims who died in the past week were aged 60 or older and were not fully or partially vaccinated. Son also said that there was an increase in breakthrough infections among people who had received two shots. This is due to the fact that the delta variant of the virus is decreasing the effectiveness and efficiency of vaccines.

Officials are working to accelerate the administration of booster shots. They also plan to share hospital capacity between the Greater Seoul region and other areas with smaller outbreaks in an effort to avoid hospital system overload.

Son stated that the government issued administrative orders to the capital region's hospitals to create hundreds more beds for patients with the virus. Son stated that more than 83% are currently occupied in the COVID-19-treatment ICUs.