Victor Rodas, with a completed geometry exercise in his hand and a smile that lit up his eyes above his mask, ran to the teacher while other students were still drawing. 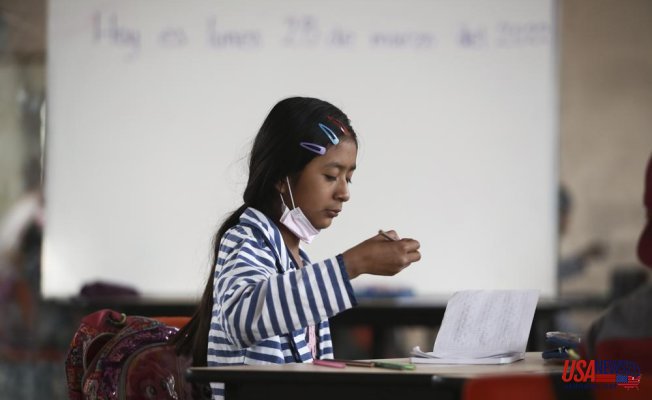 Victor is enrolled in Ciudad Juarez's school program for migrants. This gives him an advantage over many other children fleeing poverty or violence who lose years to schooling.

Accessing education for them is an urgent and daunting challenge.

In this desert city near El Paso in Texas, thousands of migrants are waiting to cross into the United States. U.S. policies prevent them from applying for asylum in Mexico. Some have been forced to wait in Mexico for court hearings, while others were banned under a Pandemic-era order that expires May 23rd.

Partnering with educators has been a common practice in pastor-run shelters. This includes either transporting children to alternative schools that teach everything, from math to reading to handling emotions, or hiring specially qualified teachers.

Although the curriculum isn't religious, it has a strong faith component. Many educators recognize the importance of schooling for the future of their students, which includes the ability to socialize, find work, and feel at home wherever they go.

"They integrate in the education system so that they can continue gaining confidence," Teresa Almada, Casa Kolping's director, said. Casa Kolping is home to Victor, and was founded by a local organization, Casa Kolping, which was established three decades ago by lay Catholic parishioners. "It is also important that families don't feel like they are in hostile territory."

Victor's older sister, Katherine Rodas (22 years old), fled Honduras from death threats with him and the two siblings she had raised after her mother died. She and her husband are so afraid of gangs they won't leave their Catholic-run shelter, but she jumped at the opportunity to bus the children to Casa Kolping.

Rodas stated that "they say the teacher always takes care of them, plays alongside them." They feel safe there.

Casa Oscar Romero is their shelter. It was named after a loved Salvadoran archbishop who was known for his ministry to the poor and was later declared a saint by Pope Francis. Many of those who were housed in this shelter fled Central America. Increasing numbers of Mexican families are also arriving in Ciudad Juarez from areas that have been ravaged by cartel warfare.

Teachers encouraged parents to come with their children to the classrooms for trust building, even after the school program began in October. Lucia, a single mother with three children, was one of them. She fled Michoacan's drug cartel after it "took over their harvest and everything in their home." For safety reasons, she asked for her first name to identify herself.

Lucia, who was making breakfast in the shelter's small communal kitchen, said that education is essential for children to grow up and be able defend themselves against any life circumstances. Lucia had been living with the family for nine months.

Carol, her 8-year-old daughter, had already put on her pink backpack and mask, ready to race ahead of the bus as soon as it arrived.

Casa Kolping is home to about three dozen children from Casa Oscar Romero, as well as another religious-run shelter. Carol, a first- through third grader, meets in one classroom. Victor, a fourth- to sixth-grader and Victor, meet across the hall in a large space whose windows offer views of El Paso's mountain ranges.

Victor envisions schools across the border. They will be big and well-maintained, which will help Victor achieve his dream of becoming an architect. When he has paper, he already draws detailed houses.

Yolanda Garcia, teacher, said that the children's greatest dream is to travel to America.

Many parents don't see the point of sending their children to school in Mexico if they don’t intend to stay. Public educators are often reluctant to admit migrants because they fear losing their teacher slots if the class size shrinks, Dora Espinoza (a Ciudad Juarez primary school principal) said. She actively reaches out and helps families, even at the shelter just two blocks away from her classrooms.

Paola Gomez from UNICEF Mexico's education office stated, "Why all the paperwork if they are going to be gone in just two weeks." This is what makes child migrant education so difficult. Casa Kolping is a pilot program funded by the U.N. child protective agency. Children who attend Casa Kolping receive transferable credit to both U.S. and Mexican schools.

According to UNHCR, nearly half of all refugee children are kept out of school by poverty and discrimination.

Insecurity is the greatest barrier. Many parents are afraid to let their children go, because they fear that their children will be victim to violence and gangs in their communities.

Samuel Jimenez, a Buen Samaritano teacher, said, "Teacher. I'm here because my parents murdered me." We can remove them from that reality in the instant they are here. They forget about it."

Buen Samaritano, a Methodist pastor's wife and his wife, housed more than 70 migrants on that day, half of which were minors. The temple was closed off by a curtain to protect the altar, which children used to sweep desert dust from the area.

Aritzi Ciriaco (10 years old), a fourth-grader from Michoacan, was eager to start the day's Spanish lessons. She had been attending Buen Samaritano for eight months with her grandparents and parents. She was concerned that it would be difficult to learn English and navigate U.S. schools once they crossed the border.

"The teachers were telling us that you can't miss one class," Aritzi stated. "But, it's still good to know other nations."

Instructors also have to catch up with students who are unable or unwilling to read and write.

Garcia from Casa Kolping said that "we are facing all kinds of falling behind." "But, most importantly, they have a lot of passion to learn. They were not able to go to school. You can see their emotion when you hand them their notebooks. Some even say, "How wonderful it feels to learn."

Juan Pacheco (12 years old) struggled to complete a punctuation exercise in Spanish one cold spring morning. His first language was Mixtec, which is one of many Indigenous languages in Mexico and Central America.

After his family fled Guerrero, Mexico, their only remaining home was Casa Oscar Romero. There they spent eight months.

Juan was able to complete another task quicker than his classmates with some coaching: drawing a banknote and a cooking pan, a radish, and an ear corn and explaining why one wasn't right with the other.

Juan beamingly said that although Juan doesn't like to speak much, he is a good student. 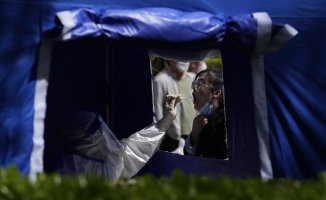 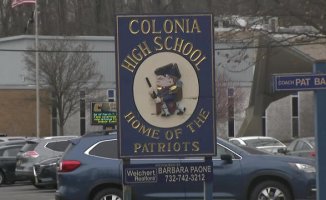 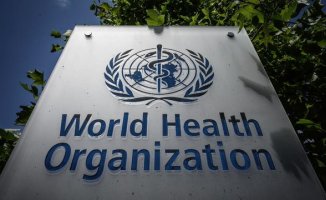